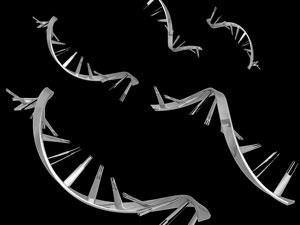 Molecules can now be designed to target specific small RNAs, opening up a new way to investigate and treat disease

Chemists in the US have found a way to predict small molecules that can target short pieces of RNA involved in some diseases, such as cancer. The team’s approach has already met with some success, throwing up a molecule that interferes with a microRNA involved in cancer. This opens up the possibility of treating diseases via a target traditionally seen as ‘undruggable’.

MicroRNAs are non-coding lengths of RNA, around 20 nucleotides long, that act as dimmer switches in cells, turning down the output of specific genes. By binding to messenger RNAs, these microRNAs can prevent the production of proteins, leading to a variety of diseases. ‘Pharmaceutical companies traditionally do not pursue RNA as a drug target because they think it’s very difficult to get molecules to be selective,’ explains one of the paper’s authors, Matthew Disney at the Scripps Research Institute. However, by turning traditional drug screening on its head, Disney and colleagues have designed a technique to find small compounds that can selectively target microRNA.

The team used a computational approach they call Inforna, to fold uploaded human microRNA sequences, before hunting for structural motifs in the RNA that would bind to known molecules. With their technique they were able to predict not just lead molecules, but also how selective those molecules would be.

In total, the team identified 27 small molecules that could potentially target folds in microRNAs that would affect their processing. Twelve of these molecules were found to be bioactive, and one was found to stop microRNA-96 from inhibiting production of a protein that causes cell death in cancer cells. ‘In fact [the molecule] was so selective and binding that if we threw it into cancer cells it triggered apoptosis in the cells – causing cancer cells to kill themselves,’ says Disney.

The selectivity of the small molecule found – a benzimidazole – rivalled the RNA recognition of oligonucleotides that bind to it using base pairing. Additionally, the molecule’s small size means it could easily enter and leave cells, making it attractive for drug companies to pursue.

Phillip Zamore, an expert in microRNA at the University of Massachusetts Medical School, US, describes the work as ‘extraordinary’ and sees potential for the technique in helping to understand the role that microRNAs play in cells. Disney agrees: ‘That’s one application of this – to precisely understand what the roles of microRNAs are by using [identified drugs] as probes to knock-off and modulate the function of the RNA.’

The team now hope to identify molecules that can be used to drug other disease-associated RNAs, as well as investigating whether their approach would work in an animal model. ‘A drug has a long path [to the patient] but I think this is solid proof of concept work that people can design small molecule modulators of RNA from sequence and get very selective compounds,’ Disney says.