Developers of a new polymer-based anti-graffiti coating that solves the problems associated with existing products are hoping for a second round of European Union funding and increased participation from industry to further develop the product and bring it to market.

Graffiti is a world-wide problem and costs billions each year to remove. But currently available commercial anti-graffiti coatings used to prevent the problem have drawbacks, says Andr? Laschewsky of the Fraunhofer Institute for applied polymer research in Potsdam, Germany, where the new coating was developed. For example, some anti-graffiti polymer coatings made from fluorocarbons or silicones create hydrophobic seals to protect natural stone from paints, but at the same time prevent buildings from ’breathing,’ increasing the risk of mould development or salt efflorescence (where a salty deposit appears on the surface). These coatings also are very difficult to remove. 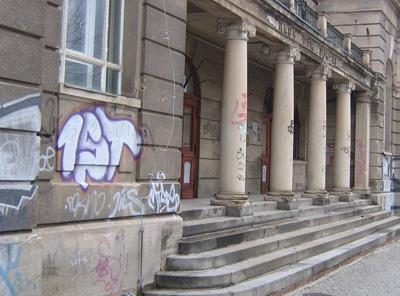 The current market does offer breathable hydrogel-based anti-graffiti coatings made of superabsorbent polymers similar to soft contact lenses that absorb paints, Laschewsky says. But when the graffiti paint is cleaned off the building the coating is also removed, meaning new coatings have to be applied after each clean which can be very expensive.

The new coating was developed by Laschewsky’s team at the Fraunhofer Institute and the Center of polymer and carbon materials of the Polish Academy of Sciences in Gliwice and Zabrze, Poland. The material, which is not shiny or otherwise detectable to the naked eye, provides protection from graffiti, weather and mechanical cleaning, is breathable, and is ’as permanent as possible’ yet can be removed if necessary with a diluted brine solution, which modifies its chemical composition, says Laschewsky.

The material is produced by combining two different polymer dispersions. The first compound is an amphoteric latex with narrow size distribution, 30-35 per cent solid content and an adjusted balance level between weakly acidic as well as weakly basic groups. The second component is a hydrophobically modified polycation colloid. These two dispersions are brought together to produce an aqueous, liquid formulation, whose properties are adjusted by typical additives, like pH-regulator, stabiliser and a hydrophobising agent. So far the team has produced batches of up to 20 litres of the new coating material, which have been tested by the German institute for materials research and testing and other organisations specialising in graffiti issues.

Developers of the new coating will meet on 18 September in Berlin with several European cultural heritage institutes and small and medium sized enterprises (SMEs), to discuss the new coating and craft a new EU funding proposal for its commercialisation. The coating was originally developed and successfully tested by a consortium operating through a project funded under the EU’s sixth framework programme.

Laschewsky says industrial involvement is now necessary for further development toward commercial production. While the team  has been in touch with larger companies, anti-graffiti coatings are a niche market probably better suited for small and mediums sized businesses says Laschewsky; ’We have had major interest from SMEs,’ he says.