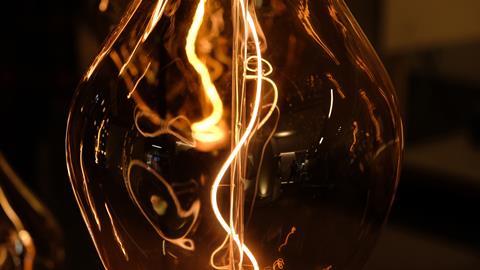 Tracking isotope-labelled drugs as they pass through the body might become as easy as switching on a light thanks to a photocatalytic reaction that attaches heavy hydrogen tags to molecules.

Almost every pharmaceutical compound contains hydrogen atoms. Swapping some of these for their heavier isotopes – deuterium or tritium – allows scientists to find out what happens to the drug in a living system. Compounds with at least four deuterium atoms can be identified by mass spectrometry, while radioactive tritium can be traced by positron emission tomography. There has also been a move to deliberately design deuterated drugs as they are slower to break down in the body.

However, isotope labelling is an often lengthy process. In several reactions, chemists need to install chemical handles in different positions and then swap each one for a heavy hydrogen. Although there are some methods that directly substitute hydrogen for deuterium or tritium, they usually only work on aromatic rings. 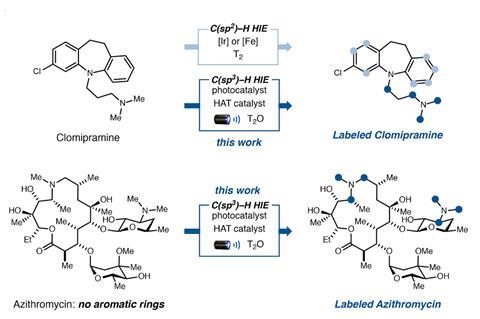 Now David MacMillan’s group from Princeton University, US, and his colleagues at Merck & Co have used blue light, an iridium photocatalyst and heavy or superheavy water to attach several deuterium or tritium atoms directly to drug molecules, whether they have aromatic rings or not. Instead, the reaction targets hydrogen atoms sitting on carbons adjacent to nitrogen – a feature found in around 93% of drugs.

‘Instead of having to go back and remake the drugs with handles that can then be hydrogenated, we can now take the pharmaceutical molecules directly, just shine light on it and it absorbs a large amount of tritium or deuterium,’ MacMillan explains. His team isotope-labelled more than 30 drugs with heavy hydrogens, including the chemotherapy medication imatinib and the antibiotic azithromycin. All of them incorporated five to nine deuterium atoms or, in the case of tritium, enough atoms to make them sufficiently radioactive for metabolism studies.

‘Being able to take one of these drug molecules and be so selective on a complex system is really promising,’ says synthetic chemist Sarah Youngs, who works with deuterium-labelled compounds at the ISIS Neutron and Muon Source near Oxford, UK. ‘The only downside is that photoredox chemistry requires more of a specialised setup but maybe this type of procedure needs to become more standard practice.’

‘It is excellent work,’ agrees organic chemist Chidambaram Gunanathan from the National Institute of Science Education and Research in Bhubaneswar, India. He is, however, doubtful if MacMillan’s method will become the new gold standard for isotope-labelling. ‘Deuteration of different functional groups will demand different conditions and catalysts.’

MacMillan says that companies including Amgen, GlaxoSmithKline and Pfizer have already reached out to talk about the new method. ‘People are excited to use it,’ he laughs.