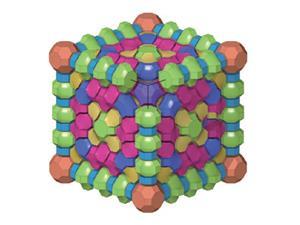 State-of-the-art structural analysis unravelled a number of zeolites composition, including that of ZSM-25

The science of zeolites, porous aluminosilicates that are industrially important catalysts and adsorbents, has taken a major step forward after researchers not only solved the structure of a highly complex zeolite but were able use the information that they gleaned to predict and synthesise entirely new structures. The finding opens the way to the development of bespoke zeolites with properties suited to specific applications.

For many decades scientists have grappled with the problem of precisely tailoring zeolites with desirable properties, often relying on inorganic or organic templates, and where the final product upon emerging from the oven may or may not have the required characteristics. Now, a team of international researchers may have gone a long way towards cracking the problem.

‘We were looking at a zeolite called ZSM-25, first made many years ago, because it has potentially useful selectivity for carbon dioxide adsorption, which is something we are interested in,’ says team member Paul Wright, of the University of St Andrews in the UK. It was known that ZSM-25 shares structural features with another zeolite, PAU, whose crystal structure has been elucidated. Colleagues at the University of Stockholm used state-of-the-art electron diffraction techniques to examine both zeolites and showed that ZSM-25 was in effect an expanded version of PAU, with each containing silicate arranged as seven discrete polyhedral elements or cages, which fit together in a complex mosaic to create an elaborate three-dimensional geometry. Crucially, the two zeolites have similar structural motifs, with chains of cages joined in specific sequences. The researchers reasoned that in the same way that ZSM-25 was an expanded version of PAU, it may in turn be possible to expand ZSM-25, using the same ‘structural coding’, to achieve a new zeolite.

Theoretical calculations predicted the new structures, and co-workers at POSTECH in South Korea with expertise in zeolite synthesis were given the job of trying to make the new frameworks. By adjusting reaction mixtures to favour the production of certain of the polyhedral cages above others and to direct crystallisation in particular directions, the team successfully synthesised two new zeolites, representing sequential expansions of ZSM-25.

‘We solved the structure of a highly complex zeolite, and predicted two others based on this structure, then made them,’ says Wright.

Other zeolite specialists are impressed by the work. David Sholl of the Georgia Institute of Technology in the US says: ‘This is a wonderful paper. The ability to synthesise new zeolites with targeted properties has been a challenging one for many years. The results in this paper show that many complex structures with potentially useful properties still remain to be discovered.’