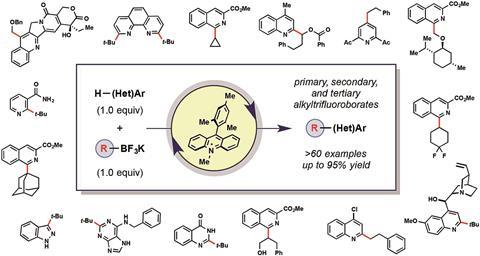 US scientists have developed a visible-light mediated reaction that uses tamed alkyl radicals to functionalise complex molecules.1 This mild and selective method could allow chemists to explore new corners of chemical space and to discover new drugs and agrochemicals.

Gary Molander and co-workers at the University of Pennsylvania have now developed a mild reaction protocol that mitigates radicals’ capricious reactivity and allows them to functionalise even complex heteroaromatics – this could increase the number of compounds chemists have access to, also known as the chemical space.

The reaction, which is inspired by the work of Daniel DiRocco and colleagues at Merck in New Jersey, US,2 creates primary, secondary and tertiary radicals from bench-stable alkyltrifluoroborates. At room temperature and under visible light irradiation, a cheap organic photocatalyst generates tiny amounts of these radicals at a time, which then react regioselectively with heterocyclic compounds. 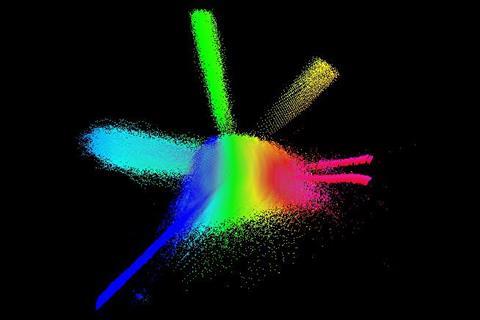 A representation of chemical space. Colour coding indicates number of ring atoms from blue = 0 to pink = 11

‘Given that the biological targets that chemists seek to manipulate are complex three-dimensional surfaces, it is important to develop reactions that install more structural complexity in three-dimensional [chemical] space,’ says Molander’s co-worker Jennifer Matsui. ‘[This type of] reaction has not realised its full potential due to issues of stoichiometry, side-reactions and excess oxidant,’ says Guy Lloyd-Jones, an organic chemist at the University of Edinburgh, UK. ‘This work will undoubtedly influence discovery chemistry in the pharma and agrochemical industries due to the ability to functionalise core heteroaromatic building blocks.’

There may still be some limitations to the reaction, as DiRocco points out: ‘I would argue boronic acids are still more available than trifluoroborates.’ However, he adds that ‘the mild conditions and broad scope [of this reaction] make it a valuable addition to the ever-increasing repertoire of methods for late stage functionalisation’.

Molander’s team has been approached by several pharmaceutical companies, asking them to aid their drug discovery efforts. Matsui was happy to say that ‘the outlook for radical chemistry in the chemistry community as well as our laboratory is very bright’.