Two catalysts have been combined in a way that could revolutionise production of a key plastic. The Northwestern University team’s approach uses platinum nanoparticles to dehydrogenate propane to plastic precursor propylene, and selectively burns off the resulting hydrogen with an indium(III) oxide coating. 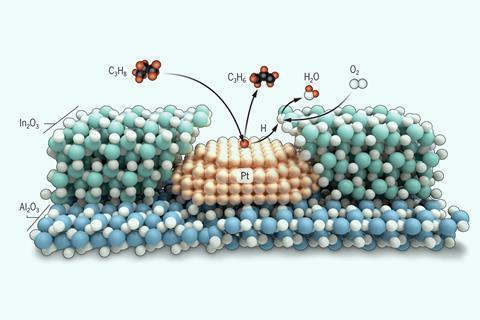 ‘This big advance comes in making a material that can carry out the dehydrogenation step and the selective combustion step at the same time, and under the same conditions,’ says Northwestern’s Justin Notestein. The team attains yields of 37%, compared with a previous best by other researchers of 20%. ‘I didn’t think it would work quite as well as it did,’ Notestein admits.

Polypropylene is gaining in popularity as it’s a relatively easily recycled plastic, and as such demand for its precursor propylene is expected to outstrip supply, Notestein says. Making propylene by oxidative dehydrogenation of propane has been proposed before, but ‘without enough success to warrant industrial application’, he adds. Together with his Northwestern colleague Peter Stair’s team, Notestein’s group had worked on the problem before and wanted to try again.

However, the researchers – primarily postdoctoral research Huan Yan – faced what Notestein calls a ‘vexing challenge’ in dealing with hydrogen. Propane dehydrogenation is an equilibrium process, meaning that letting the hydrogen byproduct build up slows the process down. The platinum catalyst needed for propane dehydration can burn off hydrogen, reacting it with oxygen to make water. But this is unselective, risking burning off valuable propane and propylene at the same time. ‘Poorly selective propane oxidation is not particularly interesting unless you are trying to grill a hamburger in your back yard,’ Notestein says.

Other scientists have avoided such challenges by separating the dehydrogenation and combustion steps, either performing them one after the other, or in different parts of a reactor. The Northwestern researchers were inspired by larger scale strategies that place selective hydrogen combustion catalysts so that they consume all available oxygen before the reaction mixture hits the dehydrogenation catalyst.

The team therefore wanted to replicate this on the nanoscale, coating an outer layer of indium(III) oxide over an inner core of an alumina-supported platinum nanoparticle catalyst. Yan took advantage of a technique called atomic layer deposition (ALD), commonly used in nanofabrication but only recently available in this catalysis context. Notestein says that the key advantage of ALD is that it ‘allows us to organise catalytic functions perpendicular to a surface, rather than only parallel’.

High school student Macy Nanda and PhD student Izabela Samek developed the ALD protocol and undergraduate student Dian Jing built a kinetic reaction model that ‘was very helpful in showing us how to think about the chemistry going on’, says Notestein. ‘Evidence suggests that we are directly transferring hydrogen atoms from the platinum surfaces to the indium oxide via surface diffusion,’ he says. ‘We feel that is critical to very rapidly consuming hydrogen atoms and oxygen.’

Giulia Tarantino from Imperial College London, UK, says that this is ‘a great example of how tandem catalysis coupled with intelligent catalyst design can overcome current challenges in chemical production’. ‘A really important element of this work is the coupling between propane dehydrogenation and selective hydrogen combustion which significantly boosts propylene selectivity,’ she says.

Jinlong Gong from Tianjin University in China calls this work ‘elegant’ and ‘a smart design of tandem catalysis’. However he adds that the ‘technology for the atomic-level control of the structures of this catalytic system needs further development for industrial scale’.

This study has shown that ALD is ‘a very effective way to modify catalysts’ Notestein says, with companies now working to scale up the approach. ALD also enables a general catalytic strategy of putting active oxide on top of a metal, he says. His team is now looking at applying the approach to other tandem reactions of light alkanes.