Work by scientists in China could prevent supercapacitor self-destruction 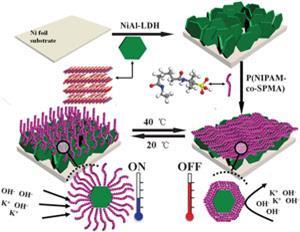 The polymer shrinks when it gets too hot, inhibiting charge transfer

Researchers in China have designed a smart supercapacitor that reversibly shuts down when it gets too hot.

Supercapacitors are similar to batteries, but instead of redox reactions, electrical energy generation typically depends on electrical double layers and pseudocapacitors. They have significantly higher power densities, meaning faster charge/discharge cycles and long cycling lifespans. This makes them ideal for use in electric vehicles and other high power output applications.

However, these properties also mean that supercapacitors are prone to a self-propagating uncontrolled temperature increase, an effect known as thermal runaway. This dangerous effect is already widely known in lithium ion batteries, where explosions have caused high profile recalls of laptops from high-end manufacturers.

Min Wei and other researchers at the Beijing University of Chemical Technology may have solved the problem in supercapacitors by using a temperature-responsive electrode. They loaded the thermosensitive polymer P(N-isopropylacrylamide-co-2-acrylamido-2-methyl propane sulfonic acid) (P(NIPAM-co-SPMA)) onto the surface of layered double hydroxides (LDH). Below its lower critical solution temperature of 32 °C, the polymer exists in a hydrophilic configuration and takes on water, which allows charge transport through the LDH layer. Above 32 °C, however, the polymer shrinks and becomes hydrophobic, inhibiting charge transfer.

Tests also showed the device was able to maintain 98% of its initial capacitance after 50 days of use, highlighting its long-term stability.

Daniel Bélanger, an expert in electrochemistry from the University of Quebec at Montreal, Canada, says the work is interesting but that the researchers have not yet proved its potential for improving the safety of electrochemical capacitors.

The researchers are now looking to improve the electrode’s reversible stability by better controlling how the thermal responsive polymer is orientated on the surface of the LDH film.