The race for an effective appetite-suppressing, anti-obesity drug has been held back by disappointing results from a human clinical trial. The findings underline the complexity of human obesity, conclude the researchers, and suggest it could be many years before a drug gets to market. 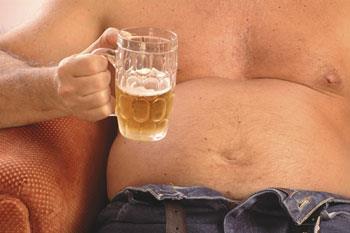 You wouldn’t catch a lab mouse in this predicament

Steven Heymsfield from Merck in New Jersey, US and colleagues carried out trials of the obesity drug, MK-0557, and found that it did not produce ’clinically meaningful’ weight loss in humans.1

MK-0557 acts by suppressing the activity in the brain of an appetite-stimulating chemical called neuropeptide Y (NPY). Animal studies with the drug had produced very promising results but the placebo-controlled trial on over 1500 obese patients did not deliver as expected. Although statistically significant, the weight loss results did not meet clinically meaningful targets set by the US Federal Drug Administration (FDA).

’As far as I know, this is one of the first full length trials of the new generation of anti-obesity drugs,’ Heymsfield told Chemistry World. ’Key signalling pathways regulating food intake have been studied since the mid nineties and many other companies are developing drugs which target these same pathways, so this is definitely a setback.’

Companies engaged in similar research and development must now decide if their prospective therapies are worth pursuing.

The trial was a culmination of over a decade of study. Researchers have worked towards the chemical control of appetite to combat obesity since the discovery in 1994 that leptin, released from fat cells, acts on receptors in the brain to regulate food intake. NPY is part of the same signalling pathway as leptin and has been a principal target for this research.

Heymsfield thinks that the complexity of human biology may have been underestimated by researchers trying to tackle one single therapeutic target. ’In humans, when you block one key pathway there are others that are stimulated to compensate,’ said Heymsfield. ’We will have to develop combinative therapies to cope with this.’

Work by Masatomo Mori from Gunma University in Maebashi, Japan and colleagues points to one such competing mechanism. The group showed that nesfatin-1, a chemical released from the hypothalamus in the brain, is a ’satiety molecule’ that causes animals to feel full after a meal.

Heymsfield is optimistic that this could lay the foundations for future drug development. ’This gives us one more level of understanding of the system and provides a good target for drugs, but these drugs would be many years off for the consumer,’ he said.

Drugs that make people feel full might not be sufficient to stop them from eating, according to Gene-Jack Wang from Brookhaven National Laboratory in New York, US.

Wang’s team conducted tests on obese human subjects using a gastric stimulator to send the same signal to the brain that occurs when the stomach wall is distended after a large meal.2 They then scanned the subjects’ brains using positron emission tomography (PET) to indicate which parts of the brain were activated. The images showed an exclusively human dimension to the desire for food.

’We found activity in areas of the brain associated with emotion and addiction as well as in the hypothalamus, where the satiety centre is,’ Wang told Chemistry World.  ’This shows that there are so many more things going on, beyond the satiety signal, which cannot be seen in other animals. A useful therapy for obesity would have to take all of the factors into account that are exclusive to human obesity such as emotional stress and addictive behaviour.’

There are a growing number of potential recipients for such a treatment. Approximately one billion people worldwide are overweight or obese and, according to the UK department of health, obesity is responsible for more than 9000 premature deaths a year in England alone.

Obesity gets up your nose

Desperate dieters may find that a new anti-obesity treatment is not to be sniffed at.

An Imperial College London research team has signed a licensing deal with CytRx.