Tequila for your fuel tank

Researchers in the UK show that Agave - a plant used to make tequila and fibres for rope - is a handy alternative feedstock to corn or sugarcane in the production of bioethanol fuel.

Bioethanol is a good clean fuel candidate as it only forms carbon dioxide and water during combustion and can be easily blended with crude oil to produce other fuels. However, the sustainability of large-scale biofuel production has recently been called into question because of mounting concerns over the impact on land and water resources.

Now a team led by David King from the Low Carbon Mobility Centre at the University of Oxford has studied the viability of using Agave as an alternative feedstock because it can be grown in an arid environment.

In the US, bioethanol is produced from corn, which is very water and fertiliser intensive and requires a significant amount of land. The result is a trade-off between feedstocks for the food markets and feedstocks for bioethanol production. In Brazil, bioethanol is produced using sugarcane. But again, land that could be used to grow food is needed to grow this and the question is: which is more important, food or fuel? 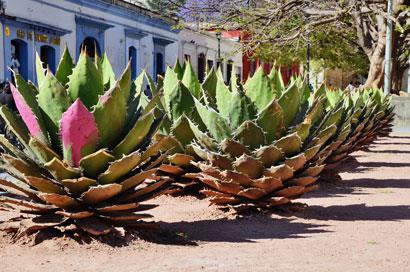 Agave plants are used to make tequila and rope, but new research shows that they could replace corn or sugarcane in bioethanol fuel production

’Agave is a sort of cactus that grows in water restricted arid areas,’ says Oliver Inderwildi, one of the researchers. ’This is essentially what we want - to produce fuel away from arable land.’ Inderwildi explains that the Agave feedstock, after harvesting, will be milled, cooked, fermented and then distilled - essentially using the same process as other ethanol production procedures.

’This is academic research in the very early stages,’ says Inderwildi. ’However, there is no real shortage of desert land and lots of deprived areas are located on the edge of deserts, so this could be a method to utilise unused land and help rejuvenate deprived areas,’ he adds.

’There is no question this is a valuable first attempt at predicting the benefits of Agave-based biofuels,’ says Stephen Long, an expert in bioenergy from the University of Illinois at Urbana-Champaign, in the US. ’But without systematic trials and measurements, the scale of the opportunity is unclear,’ he adds.

Inderwildi admits that there are still a few problems to iron out before Agave will be a commercially viable feedstock. ’They are slow growing crops and up until now they have been harvested manually,’ he tells Chemistry World. ’What you have at the moment is a labour issue and a yield issue, but we can work on increasing yields and automating the harvesting.’

The team at the Low Carbon Mobility Centre are also looking at other ways to produce biofuels from algae. ’Fuels from algae can be used as diesel type fuels or kerosene,’ says Inderwildi. ’Air New Zealand has already carried out a test flight using these fuels and performance is outstanding,’ he adds.

Even if Agave is used to produce our fuels in the future, tequila production or prices will be unaffected, according to Inderwildi.   ’I’m not at all worried about the tequila supply in bars,’ he says.