Termites rely on symbiotic bacteria to digest cellulose, so why do they digest some cellulose themselves?

Japanese researchers have discovered a previously unknown method used by termites to digest cellulose. The discovery offers a novel source of enzymes to assist in the production of biofuels, they suggest.

Primitive groups of termites break down the normally indigestible cellulose with the aid of cellulase enzymes secreted by single-celled protozoans in the termite gut. Higher termites secrete their own cellulases directly from cells in their midgut. But Gaku Tokuda and Hirofumi Watanabe from the University of the Ryukyus, Okinawa predicted that these endogenous cellulases produced by higher termites are not sufficient to meet the insect’s energy needs. 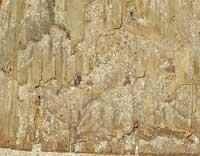 The researchers studied the gut contents of two higher termite species, Nasutitermes walkeri and N. takasagoensis. They now report in Biology Letters that cellulase enzymes are also produced by bacteria in the hindgut of these organisms.

Tokuda believes these findings will be of interest to the US Department of Energy, which is funding genomic analysis of different termite species in its search for more efficient methods of converting agricultural and forestry waste into usable energy. He points out that the termites could be a valuable source of industrial enzymes because they have adapted to live on diets involving a wide range of plant material as well as wood.

’The termite gut is the smallest bioreactor in the world,’ said Tokuda. ’We have a lot of fundamental knowledge to learn from these micro bioreactors to establish efficient biomass conversion systems.’

But termite expert David Bignell from Queen Mary College, University of London, UK, is sceptical about claims of industrial applications of termite-based products.

’This argument has been used for the last 30 years to justify all kinds of termite research but I don’t know of any commercial applications,’ said Bignell. ’We have an extensive knowledge of microbial cellulases, and most interest from biotechnologists is focused there.’

Where the Japanese study is interesting, he said, is in highlighting an evolutionary paradox: why should the termites go to the trouble of developing their own cellulases when they can be supplied more efficiently by symbiotic bacteria? Bignell suspects that cellulases in the hindgut are there to supply the energy needs of symbiotic bacteria, not the host.

’In wood feeders the limiting factor for growth is nitrogen, not carbon, because wood contains very little nitrogen. So the bacterial community of the termite hindgut contains bacteria that fix nitrogen from the atmosphere, and nitrogen fixation is energetically expensive. Any cellulose processing going on there may just be supporting the N-fixing bacteria.’