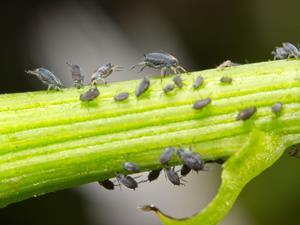 Volatile terpenes like germacrene D can attract or repel plant pests, such as aphids

Tweaking the natural substrates of terpene synthase enzymes could lead to less toxic pesticides and swathes of other important biologically-active compounds, according to UK researchers.

Terpene synthases generate a huge variety of natural compounds with important functions in all forms of life. Many plants emit volatile terpenes to repel predators, including insects, so there is considerable interest in creating new terpene analogues for pesticides. Insects, however, have a very sophisticated ‘nose’ for these compounds and may ignore even closely-related analogues.

Now, scientists from Cardiff University and Rothamsted Research have demonstrated a clever approach for synthesising terpene analogues that should show similar activity to their natural counterparts. They hypothesized that unnatural substrates that were accepted by terpene synthase enzymes – themselves known for their high degree of specificity – would produce products similar enough to be recognised by the relevant biological receptor.

Working on germacrene D synthase, the team presented the enzyme with variants of its usual farnesyl diphosphate substrate to generate a range of unusual analogues of (S)-germacrene D, a volatile chemical that repels aphids and other insect pests. While not all of the products were active, several showed similar repellent activity against grain aphids to that of natural (S)-germacrene D.

Most interestingly, a methylated form of farnesyl diphosphate gave rise to a compound that attracted aphids instead of repelling them. David Christianson, an expert in terpenoid biosynthesis from the University of Pennsylvania, US, describes the surprising result as quite fascinating. ‘This sets the stage for future work that will probe structure–activity relationships at the interface between chemical biology and behaviour,’ he adds.

Chemical attractants could have exciting practical implications too. So, as well as driving insects away from crops with terpenes, farmers could also use them to lure pests into trap devices or onto sacrificial plants at the edges of fields, from where they can be more easily removed. The highly specific interactions between natural compounds such as germacrene D and their target pests represent an advantage over traditional pesticides, which are often much more broadly toxic.

And the work may even extend beyond pesticides. The library of FDP analogues used by the researchers could be tested against other terpene synthases to generate a huge variety of unnatural natural product analogues. ‘Every terpene product, in principle, we can look at,’ notes Rudolf Allemann, who led the study. Next on his list is an enzyme involved in synthesising the important antimalarial artemisinin.