Textbook reaction has a subtle twist

A textbook reaction fundamental to organic synthesis has a subtle twist, according to researchers in Germany and the US.

The SN2 bimolecular nucleophilic substitution involves the addition of one chemical group and removal of another in a single step. But scientists from Freiburg University, Germany, and Texas Tech University (TTU), US, have now used pioneering crossed-beam experiments and computer simulations to show such reactions may be more complex than chemists had realised. 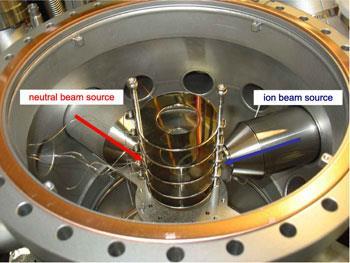 The pioneering apparatus designed by Wester allowed him and his group to investigate the dynamics of the SN2 reaction in unprecedented detail. Shown above is the collision chamber, with the two beams pointing into the stacked rings of the detector.

The Freiburg team, led by Roland Wester, analysed in the gas phase the dynamics of a classic SN2 reaction: CH3I + Cl-

CH3Cl + I-. They fired beams of chloride ions and neutral CH3I molecules toward each other in a vacuum and detected their scattering angles and velocities after reaction. This gave them a ’velocity map’ showing the direction and speed of the products. Faster ions gave a small scattering range, indicating the expected direct attack mechanism - the iodide ion leaves in a straight line. The slower ions released the product at all angles, however, which means the mechanism is very different with lower kinetic energy.

This wide scattering of products suggested a transient complex is formed, which rotates several times before breaking up. The team at TTU, led by Bill Hase, carried out computer simulations to confirm this, and found that only a small part of the kinetic energy was given to vibration in the molecule - the rest went into rotation, to power what the team calls a ’roundabout’ mechanism. ’The atomic-level SN2 dynamics of [this reaction] appear to be much more interesting and complex than initially imagined,’ Hase told Chemistry World.

"More than one colleague told me that this experiment would not work!" - Roland Wester

The Freiburg lab’s unique experimental setup allowed them to take accurate ’snapshot’ images of the reaction, and be the first to successfully marry crossed-ion-beams and velocity map imaging. ’I quickly learned that ion-neutral crossed beam imaging needed a lot of development,’ Wester told Chemistry World. ’In fact, more than one colleague told me that this experiment would not work!’

Daniel Neumark, a professor of chemistry at University of California, Berkeley, US, called the work ’a beautiful experiment’. But other chemists contacted by Chemistry World pointed out this is still a gas phase-isolated experiment. ’It should be clarified that [this study] is not directly related to the more general class of SN2 solution reactions,’ said Arieh Warshel, professor of chemistry at the University of Southern California. ’The dynamics are quite different ... the solvent molecules actually drive the reaction.’