Scientists in Japan believe they have revealed one of the key molecular targets that binds to the drug thalidomide to cause birth defects. The finding could enable new drugs to be developed that are similar to thalidomide - which is effective in treating certain cancers and leprosy - but without the catastrophic side effects on the developing embryo.

Takumi Ito, of the Tokyo Institute of Technology, and colleagues attached thalidomide to magnetic beads and exposed the immobilised drug to extracts of cells. They found that one particular protein, called cereblon, bound to the thalidomide. Cereblon’s activity is particularly important in limb development.

The team then genetically engineered chicks and zebrafish so that they lacked this protein. Embryos that subsequently developed had similar limb defects to those caused by thalidomide. They also engineered organisms to have a mutated version of the protein which was unable to bind to thalidomide. In these animals the drug did not cause developmental defects in embryos. 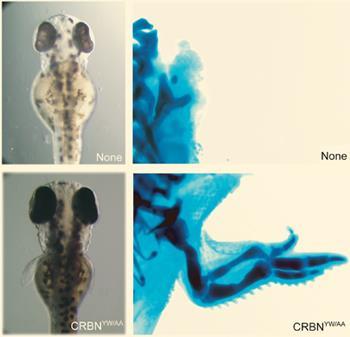 Taken together, these findings suggest that the protein needs to be present and functioning to ensure healthy development of the embryo, and that thalidomide interferes with its ability to do this.

Team member Hiroshi Handa says that while he believes that cereblon is the main target for the drug, there could be other protein targets and these could be identified using a similar approach, immobilising thalidomide in a different position and using different preparations of cellular material.

The work provides a key step towards understanding the mechanism of action of thalidomide, which could lead to the development of similar drugs that do not interfere with cereblon.

Neil Vargesson, a developmental biologist at the University of Aberdeen in the UK, has researched how thalidomide affects embryonic development. ’The significant thing about this work is that it identifies a binding protein and shows that it can cause thalidomide-like defects,’ he says. ’What needs to be done now is to determine how disruption of the protein causes defects in living organisms.’

Vargesson adds, ’personally I think it is the antiangiogenic action [inhibition of the formation of new blood vessels] of the drug that causes embryonic defect by affecting or targeting something in the endothelial cell - which my research group is actively seeking presently. This new research begs the question that the "something" could be cereblon.’