In an effort to clean up fossil-fuel power stations, scientists have completed a project to create ceramic straws that can produce a stream of pure oxygen from air.

Burning fossil-fuels in pure oxygen not only improves efficiency, it also produces a cleaner stream of carbon dioxide which can be separated more easily, and potentially used as a chemical feedstock.

Pure oxygen is normally produced by liquefying air, but this cryogenic process is relatively expensive. Ceramic membranes that allow only oxygen to pass through could provide a much cheaper option.

"By burning the methane in oxygen you produce only carbon dioxide and water, which are easy to separate." - Ian Metcalfe, University of Newcastle

At the University of Newcastle in the UK, Ian Metcalfe’s team has been experimenting with new production methods for hollow fibres of the material LSCF,

represents the oxygen vacancy within the lattice.

At temperatures greater than 700 C, and with oxygen at a greater concentration on one side of the membrane, oxygen molecules dissociates into charged ions. The oxygen vacancies within the lattice can diffuse, allowing oxygen ions to seep through to the other side of the membrane, with electrons flowing in the opposite direction.

Go for the burn

’When natural gas is combusted in air, the main flue gas is nitrogen, together with a smaller amount of carbon dioxide. If you want to concentrate the carbon dioxide to remove it from the atmosphere by storing it or re-using it, you need to separate it from the nitrogen, which is an expensive process,’ he explained. ’By burning the methane in oxygen you produce only carbon dioxide and water, which are easy to separate.’

It should also be possible to alter the ratio of oxygen to natural gas in the combustion chamber, allowing only partial combustion and the production of synthesis gas - hydrogen and carbon monoxide - which is a useful chemical feedstock. 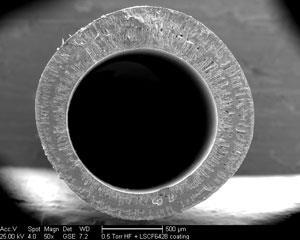 The project, funded by the Engineering and Physical Sciences Research Council, included Kang Li’s group at Imperial College, London. The team has made hollow fibres of LSCF by extrusion followed by sintering. The fibres are around a millimetre in diameter, with a wall thickness of around 200 microns, and are up to 5 metres long.

’The idea is to create a bundle of these hollow fibres, which would provide a very high surface-to-volume ratio of membrane and would also be mechanically robust,’ Metcalfe said. ’We have tested our system successfully with small bundles of fibres in the laboratory over a period of about a month and they appear to be stable. We now want to extend that period of testing and also look at the effect of impurities in the fuel feed stream.’ The team also hope to increase the flow of oxygen across the membrane.

The US Department of Energy has been developing a prototype membrane-based oxygen separator for combustion for several years and recently commissioned a unit that can produce five tonnes of oxygen per day. The oxygen would be used to gasify coal, with the aim of producing substantial quantities of hydrogen. ’There is heavy investment in this area,’ the DOE’s Arun Bose told Chemistry World. ’We cannot say very much about the structure of our membranes because of commercial issues, but we have just had a very successful run with our separator unit and we will be looking for the successful completion of a 150 tonne per day system within the next few years.’