The chemical composition of death

The chemical detection and subsequent recovery of concealed human bodies in crime scenes, or after natural disasters such as earthquakes or tornados, is now a step closer, say US scientists.

During the American Chemical Society’s Fall meeting in Washington, DC, Sarah Jones and Dan Sykes, from Pennsylvania State University, presented work focusing on the collection of volatile organic compounds (VOCs) released during early stages of human body decomposition, an area of research known as thanatochemistry. It is hoped that analysis and identification of these VOCs will eventually allow a chemical profile to be created for estimating times of death, says Jones. 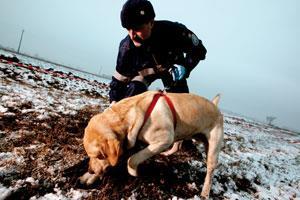 Trained dogs are currently used to search for human remains

At present, trained dogs are the gold standard for searching for human remains, but training the animals is a lengthy and expensive process, he explains. Alternative analytical methods exist but need heavy machinery such as pumps to collect the samples, or require extensive sample handling and preparation before analysis. In contrast, Jones and Sykes have devised a simple and effective, machinery- and solvent-free sampling system that requires minimal sample preparation.

Their sample collection device contains solid-phase microextraction fibres with polymer coatings known to absorb VOCs. These were placed on top of euthanised pigs - selected because they decompose in a similar way, and rate, to humans - and the gases emitted collected at intervals over the period of a week. Analysis was then carried out by direct injection of the fibres onto the GC-MS apparatus once in the lab.

The team were able to establish a general chemical profile in correlation to the first week of decomposition. During the first three days the majority of VOCs found to be released were acids and indole precursors, but during days three to seven the main compounds associated with decomposition were still present - indole and putrescine - but also increasing amounts of acids, amines and ketones were observed.

The next stage of the project is to quantify the limits of detection, Jones explains, and also to evaluate later stages of decomposition. Agapios Agapiou, an expert in thanatochemistry at the National Technical University of Athens, Greece, describes the work as ’highly important for the law enforcement and the forensic community’, and suggests that it could eventually be used to search for clandestine
graves.