The closest chemists have ever got to an inorganic ferrocene 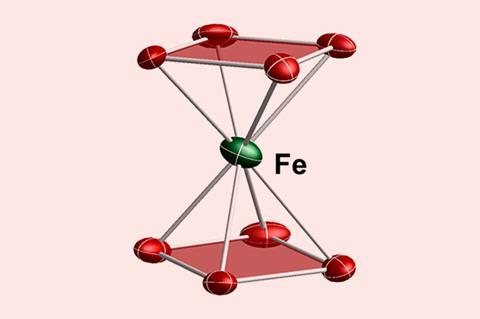 The structure of the inorganic ferrocene analogue

An iron ion sandwiched between two cyclotetraphosphide dianions is the closest analogue to an inorganic ferrocene ever created.

When ferrocene was discovered in the early 1950s, it caused quite the stir. It was the first compound made only of a transition metal and a hydrocarbon that didn’t spontaneously decompose or burst into flames when it met air or water. Since then it has become the poster child of organometallic chemistry.

Chemists have long been wanting to tinker with ferrocene’s structure and make an all-inorganic analogue by replacing the carbon with phosphorus atoms. But even though computer models confirmed that the phosphorus analogue should be as stable as regular ferrocene, it has never been made. 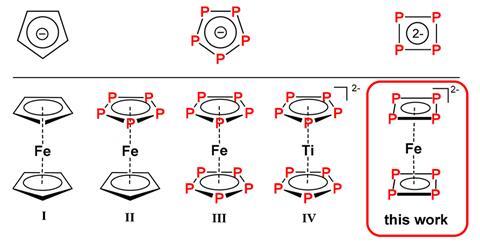 A team from China and Germany has now created the closest equivalent of inorganic ferrocene in the form of a red cyclotetraphosphide iron sandwich complex. The phosphorus squares are 6π aromatic, just like ferrocene’s cyclopentadienyl anions, and just like in ferrocene, the central iron is in a +2 oxidation state.

The molecule was predicted to exist in 2007, but syntheses had remained unsuccessful. The researchers managed to make the complex by reacting Zintl phase potassium polyphosphide KP with an iron(III) compound. Zintl phase KP consists of potassium ions and infinite spiralling phosphide chains, but a chelating cryptand molecule helps create cyclotetraphosphide dianions that can then form the iron complex.