The future of fashion

Researchers from the Republic of Korea have developed an energy harvesting device that can be incorporated into clothing to allow the wearer to generate electricity as they move and from static build-up in their clothing. The electricity could then be used to power mobile devices.

The team, led by Hyunjin Kim from the Samsung Advanced Institute of Technology (SAIT), Gyeonggi-do, found that their energy harvester was able to power a 9cm x 3cm liquid-crystal display (LCD) panel and a green light emitting diode (LED).

They created the energy harvesting fabric by integrating piezoelectric zinc oxide nanowires into a flexible textile substrate, made of silver-coated artificial fibres. They then placed a thin dielectric polyethylene film over the nanowires. The zinc oxide nanowires gather energy from external stress or strain to the fabric. Electrostatic energy is generated by movement between the negatively charged polyethylene film and the silver-coated fibres. In this hybrid system, the piezopotential is enhanced by the electrostatic effects of the charged film. This led to significantly enhanced output power, enough to generate an electrical current that powers the LCD and LED. 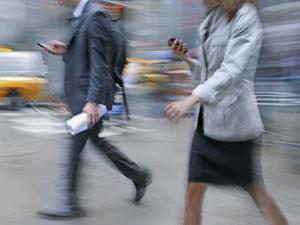 One possible avenue for this technology includes integrating communications equipment and sensors into clothing, which could prove valuable to the military or the emergency services. More relevant to most of us, perhaps, is the ability to charge devices such as mobile phones, on the go.

‘Smart textiles have been attracting attention and wearable electronic devices require technologies capable of generating and storing electrical energy,’ notes Yury Gogotsi, an expert in materials science from Drexel University, US. However, he points out that the system developed by the SAIT group ‘is still very far from practical applications’. While the 8V voltage output is ‘significant’, the current output provided by the textile is low, he says.