The hunt for metabolic biomarkers

In the largest metabonomics study ever carried out, researchers have discovered strong correlations between individuals’ blood pressure and the levels of certain metabolites in their urine. The findings also indicate some of the disease risks inherent in different human populations [1].

Metabonomics is the study of an individual’s complete set of metabolic processes. The research - a combined effort from scientists in the UK, US, China, Belgium and Japan - used data from an epidemiological cardiovascular survey called Intermap to find the biomarkers. Samples from 4330 participants were collected from four human populations and metabolites in their urine assayed by nuclear magnetic resonance (NMR). Thirty metabolites were statistically linked to blood pressure levels, says one of the authors, Jeremy Nicholson, professor of biological chemistry at London’s Imperial College. The strongest associations were with formate, hippurate, alanine and N-methylnicotinate (NMND).

According to Nicholson, no-one has previously found correlations between metabolites and blood pressure - not least because this is the first ever metabolome-wide association study. But the study’s real importance is not the specific metabolic links it found: it represents a new approach of using epidemiological data to discover physiologically testable hypotheses on specific metabolites or pathways. This could lead to the identification of metabolic biomarkers of specific diseases, and even establish the mechanism of that condition. 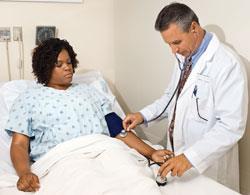 ’Our group is already using this top-down, systems biology approach to find metabolic biomarkers for a range of other diseases,’ says Nicholson. ’For example we know formate links to blood pressure, apparently through NaCl - there is a transporter in the kidney called CFEX that exchanges them. So perhaps we can manipulate the metabolism or transport of formate in order to control blood pressure.’

The approach could also be used by the pharmaceutical industry to find disease biomarkers, predictors of a response to drug treatment, or even new drug targets. According to Ian Wilson, senior principal scientist at AstraZeneca in the UK, all major pharmaceutical companies are working on metabonomics, although it has so far attracted less investment than the more fashionable genomics, transcriptomics and proteomics. ’Ideally all of these techniques would be combined in a systems biology approach to get the best understanding of a disease,’ he said.

Whether the approach could provide predictive biomarkers for hard-to-diagnose diseases is controversial. Nicholson warns that the search for such biomarkers faces analytical and biological problems, which can lead to errors. Neurological diseases are a particular challenge because the biological endpoints are usually fuzzy. ’Practical biomarker discovery is a formidable challenge. It can really only be tackled using thousands of patients,’ he says.

But Wilson is more optimistic: ’There are already indications that neurological conditions such as schizophrenia and Alzheimer’s may have a biochemical signature.’

But, for the pharmaceutical industry, an even more obvious benefit is in the search for ways to personalise drug treatment - a major R&D preoccupation for the industry. Wilson says one option is to collect samples before treatment from patients and control groups, and compare them for metabolic differences which may be predictive of the patient’s response to the drug. Examining these profiles after treatment could identify metabolic markers of response.

The wide variation in metabolism between different geographical populations identified by the new study is of special interest to the pharmaceutical industry. China, Japan, Britain and the US were found to be metabolically very different, with especially striking differences between East and West and between China and Japan. Significant differences even emerged between geographically separate populations within the US.

Some of these differences are accounted for by dietary customs, though factors such as genotype and use of medicines contribute, said Nicholson. Another crucial factor could be variation in the composition of gut flora between geographical populations. Previous research has shown that gut microbiota are significantly different between individuals in the USA and China [2]. This could affect, for example, the synthesis of hippurate, which is mostly made from microbial benzoate and thus depends on protein catabolism and starch breakdown in the gut. ’Every person has a unique set of bugs, influenced by their genetics, upbringing, use of antibiotics, and their diet,’ says Nicholson. As there are 1.5kg of bugs in the average human gut, microbial variation is probably much greater than human genome variation in a person’s ’extended genome’. ’We think the bugs themselves can be manipulated by drugs to have knock-on effects in the host, but that’s a long way away - perhaps ten years.’

Wilson says it is too early to assess the significance of gut flora in medicine, though he suspects it will offer ’very important’ possibilities either as a druggable target or a factor affecting drug response.