The many faces of platinum

Researchers in the US and China have discovered a way to grow multi-faceted nanocrystals of platinum that have much higher catalytic activity than the conventional crystalline forms of the metal. The finding could lead to more efficient catalysts for applications such as the oxidation of compounds in fuel cells and in the production of hydrogen.

Commercially, platinum nanocrystals exist as cubes, tetrahedra and octahedra. By contrast, the new nanocrystals are tetrahexahedral - they have 24 facets. Furthermore, these facets are ’high index’, exhibiting greater catalytic activity than the low-index facets of the currently available morphologies. In addition the crystals remain stable at temperatures of up to 800?C. 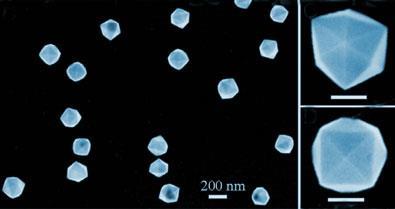 Na Tian and colleagues at Xiamen University, China, and the Georgia Institute of Technology, US, devised a means of growing the platinum crystals electrochemically. The researchers deposited platinum nanospheres, 750 nm across, onto an electrode of amorphous carbon in an electrochemical cell containing ascorbic acid and sulfuric acid. They subjected the electrode to a potential pulse sequence that alternated between oxidising and reducing potentials. This converted the spheres into multi-faceted nanocrystals 81 nm across.

The multifaceted crystals have a high concentration of atomic ’step edges’ and ’dangling bonds’ that are readily available to participate in chemical reactions. The new crystals were shown to have as much as four times more catalytic activity per unit area than existing commercial catalysts for oxidising small organic fuels such as formic acid and ethanol. However, the crystals are 20 times larger than currently available versions. ’We need to find a way to make these nanocrystals smaller while preserving their shape,’ said Zhong Lin Wang, of the Georgia Institute of Technology.

Commenting on the research, Daniel Feldheim of the University of Colorado, US said, ’With this electrochemical approach to nanoparticle shape control, metal deposition times and adsorption reaction rates can be controlled precisely through applied potential and potential step frequency. It will be interesting to learn more about the role of these parameters in directing nanoparticle shape.’

Feldheim added, ’It will also be exciting to explore the electrochemical synthesis of mixed metal and metal oxide nanoparticles because the presence of other atoms at edge sites in the lattice could enhance catalytic activity further, while lessening the amount of expensive precious metal used.’