The scaffold turns silent killer into a healing hero

A way to deliver carbon monoxide into the body safely for therapeutic use has been devised by scientists from Switzerland.

Fabio Zobi and colleagues from the University of Zurich attached a vitamin B12 scaffold to carbon monoxide-releasing rhenium complexes to increase their biocompatibility.

Carbon monoxide has therapeutic benefits and has the potential to reduce inflammation, act as a vasodilator in the treatment of cardiovascular diseases and prolong organ graft survival, particularly in heart and kidney transplants. However, administering carbon monoxide as a gas has its problems - handling it safely and targeting specific sites have been difficult.

Carbon monoxide-releasing molecules based on transition metals have been made as an alternative approach. Zobi and his team had previously made rhenium-based complexes in which the rate of CO release was modulated by pH, but they showed poor water solubility and were not biocompatible. 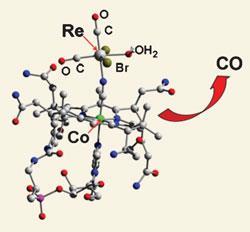 By attaching cyanocobalamin  - one of the  B12 vitamins - to their rhenium compounds, the team found that their compounds were water  soluble, biocompatible, stable in aqueous aerobic media, compared to the metal complexes without the cyanocobalamin, and non-toxic towards cultured heart and liver cells. ’We are focusing our efforts on molecules of potential interest as antiinflammatory agents and therapeutics for cardiovascular diseases,’ says Zobi. After CO release, the rhenium complex was oxidised to ReO4-, which is among the least toxic of all the rare inorganic compounds.

In another test, they saw that the compounds protected heart tissue from ischaemia-reperfusion injury (damage caused when blood returns to tissue after a restriction in blood supply, which can result in cardiac arrest). One of the compounds reduced cell death by 80 per cent compared with a control test. ’Experimental data suggest that the cytoprotective [protecting cells from harmful agents] action of our compounds may be attributed to both the extracellular release of CO and to the antioxidative action of the molecules,’ says Zobi.

’The development of carbon monoxide-releasing molecules for therapeutic use continues to move forward towards clinical application,’ says Leo Otterbein, an expert in carbon monoxide for therapeutics at the Beth Israel Deaconess Medical Center, Harvard Medical School, US. ’Hopefully, Zobi’s compounds will continue to progress in preclinical development and prove safe for human use. The plethora of reports demonstrating the salutary effects of CO argue strongly that there will be an important niche for CO as a therapeutic for numerous pathologies.’