The shortest recipe for Tamiflu

Chemists announce most efficient synthetic route yet to flu-busting drug

US chemists have published the shortest synthesis to date of oseltamivir (Tamiflu), the anti-influenza drug which is also used to treat bird flu. Barry Trost and Ting Zhang, at Stanford University, California, think their synthesis might provide an alternative route for making the drug commercially.

Oseltamivir, marketed by Swiss-based healthcare company Roche, is currently synthesised from shikimic acid - a compound found in the Chinese star anise flower. Many synthetic chemists have published recipes to make the drug from other starting materials, in case supplies of shikimic acid can’t meet global demand.

Trost and Zhang used a commercially available starting lactone and took just eight reaction steps to get to the active ingredient (-)-oseltamivir. The overall yield of the process was 30 per cent - better than any other syntheses so far, the researchers say. But the process would have to be scaled up to produce much larger quantities for commercial production - a possibility that would take some time to investigate. 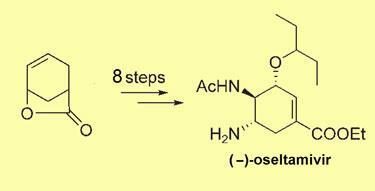 Tamiflu was made in 8 steps from a commercially-available lactone

’I believe our synthesis is a reasonable one to seriously evaluate for commercialisation,’ Trost says. ’We are not patenting the synthesis and I believe it should be scalable.’ The cost of the starting lactone should be low, he adds, as butadiene and acrylic acid are its ultimate precursors. ’I do hope that commercial places will look seriously into using it, but I have made no effort to contact any. With the publication of our work, time will tell what happens next.’

A Roche spokeswoman told Chemistry World that the majority (two-thirds) of their shikimic acid starting material was now made by bacterial fermentation - a process no cheaper than extracting the material from star anise, but more reliable. Roche can make 400 million treatment courses of Tamiflu a year. ’At present, supply of Tamiflu exceeds demand, so Roche has tailored production accordingly. We have the capacity to ramp up production if needed,’ she said.