The true cost of getting energy from the sun

US scientists have proposed a new method to compare the cost of solar energy technology with traditional sources as current methods may not give a realistic result, they say.

Seth Darling and colleagues from the Argonne National Laboratory in Illinois have used a simulation that gives distributions of values for variable parameters such as weather, solar panel performance, operating costs and inflation to more accurately reflect the overall cost. ’For solar energy to make a significant dent in the overall energy mix, its cost will have to be similar to or lower than traditional sources such as fossil fuels,’ says Darling, ’but to make this comparison, you need to know how to calculate the cost.’

Current methods use single values for these parameters in a cost calculating equation. ’In most cases, calculations are performed with a sweeping set of assumptions such as how much sunshine there’ll be over the next 30 years and how much the solar panel performance will degrade,’ he explains. ’All of these assumptions carry an uncertainty. Without getting a quantitative handle on these uncertainties, you are flying blind regarding the price at which energy must be sold to break even over the technology’s lifetime.’

Stuart Irvine, director at the Centre for Solar Energy Research, UK, agrees. ’One thing that concerns me is the lifetime assumption of the photovoltaic modules,’ he says, adding that it’s difficult to tell how long a module will last. ’You could use the manufacturer’s guarantee period, which is typically 25 years, but that may not be valid in terms of whether the module is going to be performing in 25 years.’ Irvine thinks that Darling’s work is a step towards adopting a new approach to calculating cost. 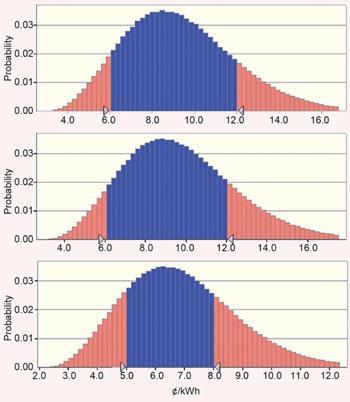 The cost output distributions for Boston (top), Chicago (middle) and Sacramento (bottom) show that the cost for the system in Sacramento is centred around a lower value (6.9 cents per kilowatt hour). The blue area represents one standard deviation

To test their approach to determine the most cost effective location, Darling’s team used parameters for photovoltaic systems placed at three cities in the US - Sacramento, Chicago and Boston. They predicted sunlight variation for the next 30 years by using data from 1960-1990. They also compared power conversion, system degradation, and assumptions associated with cost such as real discount rate (cost of borrowing money to set up the systems). They fed the values into a Monte Carlo simulation - a computational technique that tells you how likely each outcome is and which variables affect it the most.

’The results indicate that the real discount rate is the most relevant factor,’ says Jos? Goldemberg, an expert on energy and environmental issues from the University of S?o Paulo, Brazil.

Darling’s team explains that the interest rate and so the cost of borrowing money is out of the control of the person setting up the solar installations. This is an area in which stakeholders such as governments can step in to provide greater certainty to lessen the impact of overall capital markets.

Darling hopes that stakeholders in the energy community will adopt his approach. The biggest challenge, he says, is getting performance data from diverse geographic locations. ’We hope that partnerships between the solar energy industry, utility providers and national laboratories will focus on collecting the data and making it accessible to those interested in exploring the potential of solar energy,’ he concludes.