Theory put into practice as new class of superbase created 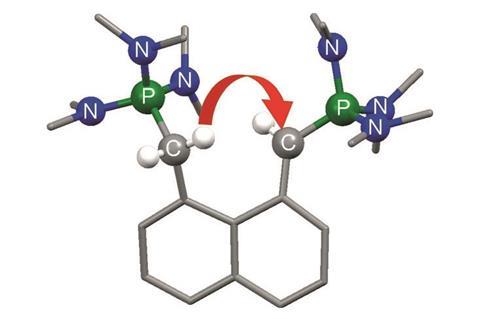 A new type of superbase has been made by researchers in Germany. This new molecule is the first to get its super strength basicity from two interacting carbon–phosphorus double bonds.

Proton sponges and other superbases are non-nucleophilic bases, meaning they can deprotonate many compounds but their bulky structure doesn’t allow them to take part in undesirable side-reactions by attaching themselves to electron-deficient atoms. Most superbases rely on basic nitrogens in the form of imine (N=C) or phosphazene (N=P) groups, but researchers had predicted that molecules with carbon–phosphorus double bonds (P-ylides) could potentially outperform other superbases’ proton affinity.

Now Jörg Sundermeyer and colleagues at the University of Marburg put theory into practice and created the first carbon superbase. In a straightforward two-step synthesis they made a bis-P-ylide with two basic carbons forced into close proximity by fused benzene rings.

Sundermeyer’s team found that the new compound’s proton-capture mechanism is rather unusual: while other proton sponges form hydrogen bond bridges with a proton sitting symmetrically between two nitrogens, the new superbase’s proton hops back and forth between the basic carbons.

The carbon superbase’s proton affinity already rivals that of the strongest imine superbase, but Sundermeyer’s team thinks that attaching phosphazene groups to the structure would push the limits of superbasicity even further.