This metal triangle seems to defy definition – is it aromatic or not? 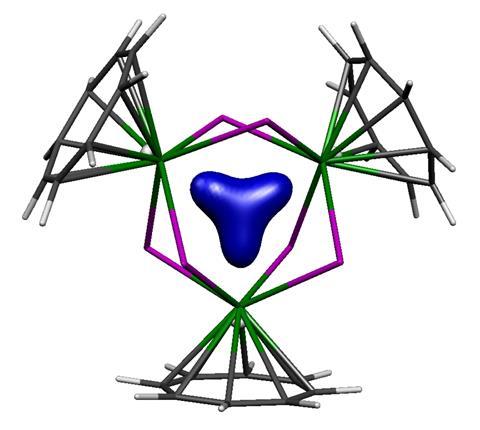 The highest occupied molecular orbital of the tri-thorium cluster

When scientists discovered the first aromatic thorium ring last year, it seemed to defy what was known about actinide chemistry. But other researchers have now challenged this, saying that aromaticity indicators have been misinterpreted and that chemists should stop using aromaticity to describe metal clusters.

While this may seem like a purely academic discussion, knowing whether a molecule is aromatic or not is important to all chemists. ‘It’s teaching us something about the way nature is prepared to organise elements and what the consequences are,’ says Stephen Liddle from the University of Manchester, UK, who co-discovered the tri-thorium cluster.

When the team around Liddle and his colleague Nikolas Kaltsoyannis first investigated the molecule, they already had an inkling that it may be σ-aromatic.1 The three thorium atoms formed a symmetric ring. They shared an orbital containing two delocalised electrons, which fulfils Hückel’s aromaticity rule. And the molecule’s nucleus independent chemical shift (Nics), which indirectly probes aromatic ring current by measuring magnetic shielding at the centre of the ring, indicated aromaticity.

But Cina Foroutan-Nejad from the Polish Academy of Sciences argues that Nics, in this case, is wrong. Thorium atoms sustain strong paramagnetic currents around their nuclei, which creates a magnetic shielding effect in the ring centre masquerading as aromaticity. ‘If you are using Nics for measuring aromaticity of a metallic system, you’re most probably making a mistake,’ he says.

A study led by Foroutan-Nejad,2 classes the molecule as magnetically non-aromatic or weakly antiaromaticity. Another researcher, in a preprint study,3 suggests the molecule has unusual charge-shift bonds instead of being aromatic.

In their response,4 the Manchester team writes that there ‘is no universal right or wrong when discussing aromaticity’. Liddle and Kaltsoyannis explain that one of the reasons for the confusion might be the thorium ring’s rather unusual bonds. They are curved into the ring centre – a fact that isn’t represented well by the lines between the atoms in a structure drawing. ‘With the bond-critical points concentrated in the centre, the diamagnetic swirl is in the centre, and the Nics analysis is probing that – you can see how simultaneously we can both be right,’ says Kaltsoyannis.

‘The issue of aromaticity of these systems is a bit controversial,’ says Miquel Solà, who researches catalysis and aromaticity at the University of Girona in Spain. He praises both teams’ results, saying that it is down to interpreting the data one way or another. Solà says the thorium ring’s three-centre-two-electron bond is similar to the trihydrogen cation H3+, the smallest aromatic. But he ‘would be more in favour of that there is no aromaticity’ because the thorium cluster seems to lack an aromatic ring current.

Foroutan-Nejad says it’s a misconception to think of a direct relationship between ground state properties like bond length and magnetic response like ring current. While this may be true in organic aromatics, it isn’t always the case for metallic compounds. He suggests it may be time to stop using the term aromatic for metal clusters. But Solà disagrees, pointing out that some metal species, like Al42–, are clearly aromatic in the same way hydrocarbons are.

‘I don’t think there’s a clean and easy answer to [defining aromaticity universally],’ says Liddle. The term can have a number of meanings. ‘In a sense, that’s not helpful because it’s becoming a sprawling array of things. We like to categorise and classify things as chemists – this is starting to defy our ability to do that. But that’s just showing you that this principle sits under an awful lot of things, but it manifests in different ways.’

This article was updated on 6 April 2022 to correct the picture credit and adjust a quote. The change did not affect the meaning of the quote.