Threat to future of European synchrotron

Doubt over German and UK funding for the upgrade of ESRF

Plans to upgrade the most powerful x-ray source in Europe are in doubt because Germany and the UK may not come up with their share of the necessary funding, the facility’s head has warned.

Bill Sterling, who has been director general of the European Synchrotron Radiation Facility (ESRF) since 2001 and leaves the post at the end of this year, said that ambitious plans to improve the facility - at a cost more than 200 million euros (?150 million) over 10 years - could fall through if the 18 countries that pay its running costs now fail to find the cash to see it through.

The synchrotron’s powerful x-rays are used to look at the atomic structure of materials and biological molecules. But one of the main purposes of the upgrade is to improve the imaging of nanostructures - such as quantum dots used in semiconducting materials.

Sterling, who was in London to receive the Glazebrook medal from the Institute of Physics on 24 January for his ’outstanding leadership’ of the ESRF, said that the UK Science and Technology Facilities Council’s recent budget shortfall of ?80 million had left the country’s 14 per cent contribution to the synchrotron project in doubt.

’Until recently, the STFC were very positive, but now they are in a difficult financial situation,’ Sterling said. ’If STFC pulls out, it will put us in great difficulty.’ Meanwhile, Germany may decide not to provide it’s 25.5 per cent share of the costs because it has already invested heavily in big science projects within its own borders - such as XFEL, the European x-ray free-electron laser, to be built between Schenefeld and Hamburg, and the new PETRA III synchrotron, also in Hamburg. 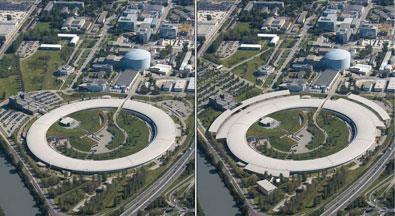 Aerial view of the ESRF today (left) and artist’s impression (right), which shows the proposed experimental hall extensions and a new site entrance.

Without the upgrade, the ESRF would fall behind the other two world-class synchrotrons  - the Advanced Photon Source in Argonne, US, and SPring-8 in Japan, Sterling added. ’If [the upgrade] doesn’t go ahead, this lab will remain competitive for some time but we’ll lose this edge to the Japanese and US facilities.’

As well as the impact on basic research, there will be repercussions for industry. ’We estimate 25 per cent of experiments carried out in ESRF are just one step away from industry,’ Sterling said. Toyota, for example, buys time on their beamlines to study catalysts for their car exhausts.

If the money arrives, much of the cash (nearly 100 million euros) would go to upgrading around half of the 31 x-ray beamlines, to allow imaging of particles between 10 and 100nm in size. That will require doubling the length of each beamline from 70 metres to 140 metres, and better x-ray optics to focus the beam down to a spot less than 50nm across.

That could also pave the way for techniques such as coherent diffraction imaging (CDI) - an x-ray technique that can be used to analyse the shape and composition of nanoscale features such as quantum dots and nanotubes without destroying them. The microelectronics industry in particular could benefit - by 2011 many devices are expected to include parts that are 20nm in size.

There are also plans to step up the power of the beam by increasing the current of the circulating electrons from 200 to 300 milliamps at a cost of about 50 million euros. Assuming the upgrade goes ahead, that could allow better surface chemistry studies of heterogeneous catalysis. Fast chemical reactions, such as those which occur during the electrochemical cycle of a battery, could be investigated with techniques such as powder diffraction.

More powerful focussed x-rays could also be useful for observing the mixing of liquids inside the microfluidic cells used in lab-on-a-chip technology. New labs will allow samples to be observed under extreme pressures and temperatures as well magnetic fields of up to 40Tesla - around four times higher than available today.

For x-ray crystallographers, a more powerful beam will mean that smaller crystals can be studied and more proteins could be ’filmed’ as they catalyse reactions at their active sites.

Finally, in a move expected to cost a further 45 million euros, the experimental hall would be extended by a third so that it can house the longer beam lines and extra labs.

A final decision on funding the upgrade is expected this spring. Sterling said that for countries reluctant to hand over money, ’in kind’ contributions would be a possibility. The ESRF is also considering taking a loan from the European Investment Bank, to bridge the gap caused by partner countries delaying their payments.

Sterling is also hoping for a big contribution from the new French government, led by President Nicolas Sarkozy. ’We’ve made it clear that we expect them to take a strong lead on this.’