French, Korean and Danish researchers say that they have seen iodine molecules form in the most detail yet.1Michael Wulff from the European Synchrotron Radiation Facility (ESRF) in Grenoble, France, and his teammates claim the first direct observations of the reaction’s changes in molecular structure and surrounding solvent. ‘We can film the birth of a molecule in 10 picosecond steps, which allows us to see its size and how it vibrates,’ Wulff says. However, not everyone in the community is completely convinced by the team’s methods. 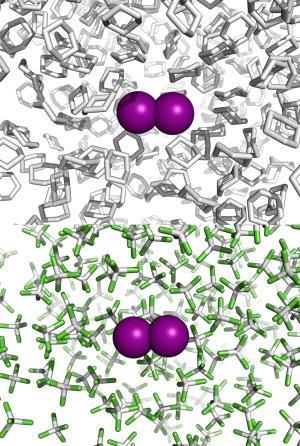 The team used complex maths to convert their x-ray patterns into images, and it is this processing that is in question

The birth Wulff’s team witnessed was rapid recombination of two iodine atoms, produced by firing a laser to dissociate an I2 molecule. ‘The free atoms bounce around like tennis balls in the solvent cage,’ Wulff explains. ‘After 1–2ps they collide and stick back together. The molecule has very high energy, so it will vibrate violently and cool down over tens of picoseconds.’ The team then fired x-rays from Wulff’s synchrotron beamline at the solutions and measured changes in the position and electron density of their contents from the resulting scattering patterns.

Although ESRF’s X-ray pulses are typically just 100ps long, even that cannot usually capture atomic movements in detail. To overcome this, Wulff and his team took x-ray patterns of different ‘time slices’. The scientists varied the laser pulse firing from 400ps before to 200ps after the X-ray pulse in 10ps steps, recording around 1,000 patterns at each step. Then they subtracted a baseline pattern taken 3ns before to reveal the changes caused by the reaction at each slice. Finally, they converted the scattering patterns into images using a series of complex Fourier transform and deconvolution procedures. ‘We have developed mathematical tools to treat such data that were not widely known before,’ Wulff says. ‘They have been refined, and combined with x-ray instrumentation to achieve a milestone.’

Their pictures show initial violent, approximately 1.4Å amplitude, vibrations. The solvent cage expands by around 1.5Å, before shrinking back to its original shape as iodine’s vibration amplitude returns to around 0.1Å. But iodine is just the start. ‘This new technology could be used in protein studies,’ Wulff underlines. ‘It will impact how free-electron lasers, with pulses 1000 times shorter than ours, are going to revolutionise this kind of work. In order to exploit that you have to go through this synchrotron stage – we are an intermediate step.’

Christian Bressler from the European x-ray free-electron laser (XFEL) in Hamburg, Germany, (due to be completed in 2015), agrees ultrafast x-ray studies have great potential. And though these pictures of iodine agree with lower-resolution data on this reaction, he’s worried that the processing steps that create them need better calibration. ‘Analysis of diffuse scattering patterns is extremely involved, and it is not yet clear to me how unambiguous the results become,’ he says. As such, he wants Wulff’s team to publish more raw, rather than processed, data. ‘This system is well known, and could have calibrated the analysis tools. It will be interesting to see how these results survive thorough investigation at x-ray free-electron laser sources.’

Kristoffer Haldrup at Technical University of Denmark in Lyngby has used time-slicing alongside Wulff on iridium complexes,2 and says the iodine study underlines how it brings new chemical insights. ‘It is also a bit of a tour de force analysis-wise, as direct “translation” from scattering signals to changes in real-space atomic coordinates is far from trivial. This way of analysing the data presents a somewhat more intuitive interpretation than the method usually chosen by my own group, but also introduces some slight ambiguities in such interpretation. It will stimulate discussion in the time-resolved chemistry community, but together with our 2011 study, represents a solid step forward in methodology.’