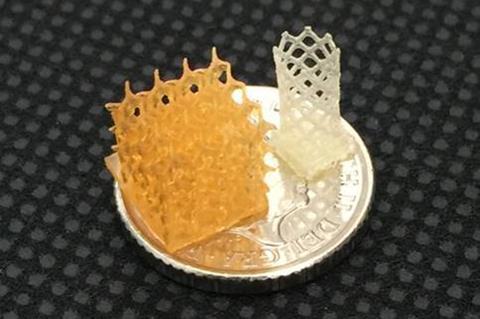 Since 3D printing was developed in the 1980s, it has found many uses in medicine. The technology assists surgeons by creating patient-specific organ replicas they can practise on before performing complicated operations. It can provide surgical tools and custom-made prosthetics. And 3D printing holds the potential to solve some limitations of organ transplantation, by providing a way to manufacture personalised tissue engineering scaffolds, repair tissue defects in situ with cells, or even directly print implants.

Researchers at the University of Birmingham, UK, have now developed biodegradable polymer inks that will help take the technology a step further.

‘The big step we took is in the precise design of the monomer and the mixture of monomers that we used,’ Dove says. By using multiple carbonate monomers, Dove can create resins that have different mechanical properties when cured; for example, tuned to a specific degradation rate.

‘We can tune the properties of the material, and that’s a big advantage,’ Dove explains. ‘We can control its microstructure, its macroscopic shape, everything about it really, which is unusual.

This gives the resins a range of potential applications. Initially, the team is aiming to develop devices that fill the tissue void after intrusive surgery. ‘A big problem after breast cancer removal surgery, for example, is the recovery,’ Dove says. ‘It’s quite hard to reconstruct the tissue. That takes several operations.’

The resins can be 3D printed into a unique support structure for tissue re-growth after the removal of a tumour. Scaffolds can fill the void where the tumour was, and also help to direct radiotherapy to improve patient outcomes and survival rates. The scaffold then degrades away to leave nothing but natural tissue behind.

‘We can print any shape and size and we’ve got beautiful data that shows that there is no real reaction to these materials when they’re implanted,’ Dove says.

By using thiol-ene chemistry, the resins avoid the potentially toxic residual acrylate groups that other biomaterial scaffolds rely on. Dove’s team has conducted a four month rat study on the material and is now working on further animal studies, looking at both shorter and longer implant periods to observe the response to the material across its lifecycle.

Dove can also see the inks being used in paediatric applications, such as treating musculoskeletal problems, where bespoke, printed products in different sizes will fit more closely to a child’s growing body.

‘We are designing devices at the moment and are trying to understand how they perform, but also how they feel and what patients would like from them,’ Dove says.

Dove and his business partner, Andrew Weems, spun out 4D Medicine from the University, to focus on moving the technology towards market approval.

Weems was instrumental in the development of the technology, Dove says. As a PhD student, he contacted Dove about linking their respective experiences of 3D printing and shape memory, thinking there could be biomedical interest in the combination. Weems secured a fellowship from the Whitaker International Program to work with Dove. ‘We made very good progress very quickly and it became apparent that there was an opportunity to do something really impactful,’ Dove remembers. 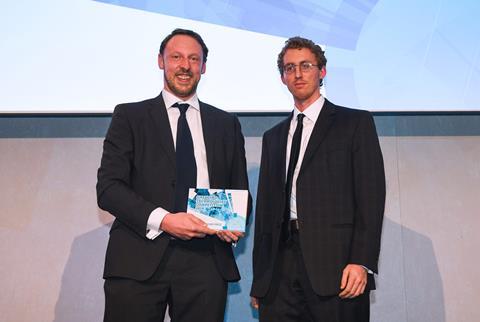 Weems later received funding from Innovate UK’s Innovation and Commercialisation of University Research (Icure) scheme, which finances researchers to explore the commercial potential of their research.

Both rounds of funding were essential for the team’s progress. After all, funding is always the biggest hurdle to developing a new technology, Dove says. ‘Andrew coming in with a Whitaker fellowship was definitely a turning point in the story because it’s hard to get funding for an idea like this.’ The pair were also winners of the Royal Society of Chemistry’s Emerging Technologies competition in 2018.

Now, Dove and Weems are seeking the investment that will allow them to take the final steps towards getting the toxicology data they need to prove to regulators that what they are trying to do is safe.

The regulatory hurdles for medical devices are big, Dove knows. ‘We’ve got a lot of work still to do to prove the safety of the material, and then there are lots of different steps we have to take along the road to get regulatory approval,’ he says.

‘But I think the combination of the application we’re targeting, and the material we’re using will help mitigate that risk and the initial results really point us in the right direction. It’s looking really good at the moment.’

Origin: Spin-out from the University of Birmingham