Chinese scientists believe they have identified the toxic assassins responsible for the mysterious deaths of hundreds of people in one of the country’s provinces over the past 30 years. The culprits appear to be three poisonous compounds found in a mushroom that grows locally: two novel amino acids and one already known organic acid.

Over the past three decades, more than 260 apparently healthy villagers in Yunnan Province in south-west China have died suddenly and inexplicably, usually in the rainy season between July and September. Investigations pointed the finger at a previously unknown species of mushroom, which was given the name Trogia venenata, and following a campaign to warn Yunnan villagers against eating the mushroom, there were no such deaths in 2010 and 2011. So while the mushroom seemed almost certain to be the killer, little was known about the toxic compounds it harboured. 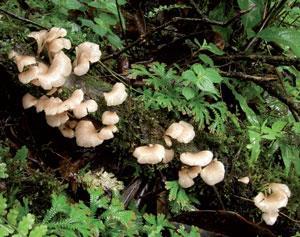 The mushroom has caused the deaths of more than 260 people

Now, a team led by Ji-Kai Lui, of the Chinese Academy of Sciences, and Guang Zeng, of the Chinese Centre of Disease Control and Prevention, has pinpointed three specific toxins in the mushroom which, when combined, can kill.

The researchers systematically prepared extracts of the fungus and tested their toxicity on mice. Samples that were poisonous were further and successively fractionated, each time the toxic phase being identified and isolated. Eventual purification by ion exchange and chromatography revealed three toxic molecular species.Two of these were the previously unknown amino acids, 2R-amino-4S-hydroxy-5-hexynoic acid and 2R-amino-5-hexynoic acid. The third compound was the known toxin

’We are 90% certain that we have solved the mystery that this mushroom - a new species - is the cause of the deaths,’ says Lui. ’And we are almost 100% certain that these toxins are the cause of the mushrooms being fatal.’ Lui says that the two new amino acids alone are of ’medium’ toxicity, and that around 400g of mushroom would be needed to kill a man. ’But when we take the third toxic compound, which was already known, in the same mushroom, the accumulating effect means much lower amounts would kill a man.’

Commenting on the finding, William Wood, an expert on the chemistry of fungi from Humboldt State University in the US, says that the study is ’remarkable since it combines natural product chemistry, toxicology and human pathology’. Wood adds: ’The interesting structure of the two acetylenic amino acids demonstrates that mushrooms are capable of extraordinary chemical syntheses. It is interesting to speculate about possible natural targets of these compounds. Likely, they are active against microorganisms, insects or other natural mushroom predators - human toxicity is likely just bad luck.’

James Hanson, emeritus research professor of chemistry at University of Sussex, UK, and an expert on fungal metabolites, says: ’Toxic amino acids are well known amongst the metabolites of fungi; for example ibotenic acid from Amanita muscaria - the fly agaric often pictured on the cover of Alice in Wonderland - and coprine from Coprinus comatus, the ink-cap.’ Hanson also notes that the novel amino acids are D-amino acids rather than the common L-amino acids. He concludes: ’Warning: don’t eat fungi from the wild unless you are sure what they are!’