Trapping a polymer in a tiny dark space between two mirrors is all it takes to profoundly change the way it self-assembles – forming flakes instead of the usual fibres. The tiny mirrored box provides so-called vibrational strong coupling between molecules and the vacuum field, the boiling quantum mechanical soup that fills the universe with transient photons and other particles.

‘I thought it was pretty out of the box, even though it is actually inside a box,’ jokes Hasan Arslan, who works in supramolecular host–guest chemistry at Bucknell University, US, and wasn’t involved in the study. If vibrational strong coupling (VSC) proves to be generalisable, he says, it could allow scientists to modify supramolecular systems without adding reagents or making any chemical changes.

The researchers behind the work, led by Thomas Ebbesen from the University of Strasbourg, France, is one of the few teams that tries to tap into this tantalising new way to control chemistry. They were investigating how VSC affects the electrical conductivity of gels when they stumbled upon its effect on supramolecular assembly. ‘When Kripa [Joseph, Ebbesen’s colleague] was measuring, it didn’t go at all what she expected, the conductivity dropped instead of what we were hoping – that it would go up,’ Ebbesen recalls. 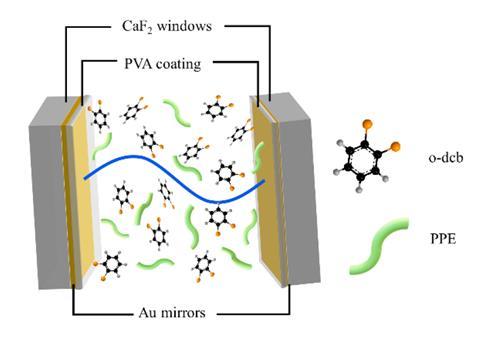 But when Joseph retrieved the polymer – a type of poly(para-phenyleneethynylene) – from the mirrored microfluidic cell the team uses to tune the vacuum field to their compounds, instead of the usual fibrous networks the material had created amorphous flakes. It also turned out that under VSC, the polymer’s self-assembly rate increases by 20%.

What switches on the coupling between matter and the transient photons that exist even in the dark of the microfluidic cavity is the right spacing between the mirrors – around 10μm in this case. Not unlike individual atoms’ orbitals coming together to form a molecule, matter and light come together to create hybrid particles called polaritons. And just like a molecule is different to its component atoms, the new VSC entity behaves dramatically different to its parent.

‘This study indicates that VSC has extended from introductory organic chemistry to advanced supramolecular chemistry,’ says Kenji Hirai from Hokkaido University in Japan, one of the lead researchers of a preprint study describing VSC’s effect on metal–organic framework organisation. ‘Intermolecular interactions, which dominate supramolecular assembly, are much weaker than covalent bonds,’ which Ebbesen’s and other teams targeted in previous studies.

Although supramolecular chemists can already modulate self-assembly – using light, heat, sound and many other stimuli – Arslan says the appeal of VSC is that it requires no changes to a compound’s structure. ‘A lot of the other stimuli require very specific systems that will respond to those stimuli – with light you need a molecule that can actually absorb that light… That requires some serious design on the chemist’s part.’ Scaling up VSC from its current tiny setup of less than 1ml, however, might be difficult, he points out.

The study also brings up a lot of questions, Arlsan says. Before being able to use it, chemists would need a better understanding of how VSC does what it does. Ebbesen agrees, though at this stage, he can only give ‘hand-waving arguments’. ‘We know that something called [London] dispersion forces are very involved,’ Ebbesen explains. ‘When we are strongly coupling, we are mixing in the vacuum field very strongly into the [molecules’] vibrational modes. This might be a reason why van der Waals forces change, which changes the intermolecular interactions and, as a result, the assembly is perturbed.’

Nevertheless, Ebbesen is confident that VSC will eventually become a ‘button’ chemists can push to tune how molecules behave. ‘That’s what interests industry too – they had tried all the other buttons, and suddenly we come with a new button that nobody was aware of that can modify basic chemical properties.’