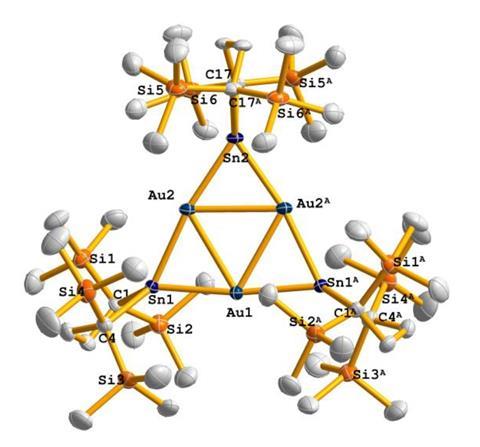 In most traditional aromatics like benzene, the orbitals that overlap and allow the electrons to freely run around the ring and are therefore responsible for aromaticity, are of the π variety. But overlapping σ orbitals can also house delocalised electrons. There are a few of these σ-aromatic molecules out there, like the hexaselenyl benzene cation or the only recently discovered hexaboron rhenium anion.

In both these σ aromatics, the overlapping orbitals form a cylinder around the ring. The new gold–tin cluster, however, is also Möbius aromatic. Its orbitals’ nodal planes wind themselves around the ring like a Möbius strip, a surface with a half twist and only one side. Overall, this makes the anion σ-Möbius aromatic, the first of its kind.

The molecule is also the first cyclic trigold anion – an ion that had previously only been observed in the gas phase. But the dark blue potassium salt of [(RSn)3Au3]–, where R is a bidentate ligand, is stable for several weeks when stored under inert gas. Its gold atoms form a triangle with the tin atoms sitting on the periphery to, overall, form a distorted hexagon.

The researchers behind the study are now cataloguing the compound’s reactivity, trying to find out whether it shows catalytic activity.