Two for one - cleaning water and generating energy

A fuel cell system that can generate electricity from organic compounds and clean up wastewater at the same time has been developed by scientists in China.

Yanbiao Liu from Shanghai Jiao Tong University and colleagues made a photocatalytic fuel cell comprising a TiO2-nanotube-array (TNA) anode and a platinum-based cathode. The cell uses light energy to degrade organic compounds in wastewater, generating electrons that pass through to the cathode, which converts the chemical energy into electrical energy.

’Organic compounds in wastewater are important sources of energy,’ says Liu. Organic matter that amounts to a third of the global energy demand is lost in wastewater each year. ’Seeking sustainable approaches to recover energy from this waste and degrading it to a non-hazardous product is desirable.’

The team used the cell to clear aromatics, azo dyes, pharmaceuticals, personal care products and endocrine-disrupting compounds from wastewater samples. They found that all of these compounds were degraded by the cell to generate energy. 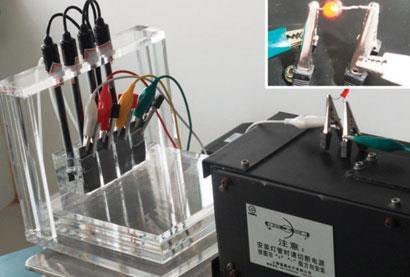 By modifying the electrodes with semiconductors such as CdS, the system can use visible light and solar light instead of UV light as a catalyst, says Liu. This means that the system can be used to treat wastewater outdoors.

’Liu and co-workers have extended well established photocatalytic and fuel cell concepts,’ says Prashant Kamat, who investigates fuel cells and environmental remediation at the University of Notre Dame in the US. He cautions that choosing the correct semiconductor photocatalyst is crucial when combining environmental remediation with solar energy conversion. ’One needs to exercise caution while using visible light absorbing semiconductors such as CdS, as it is known to undergo anodic corrosion, especially when the organic contaminant level becomes low,’ he adds.

Liu concludes that the system is just a small laboratory prototype, which he believes can be optimised further and up-scaled for practical environmental applications.