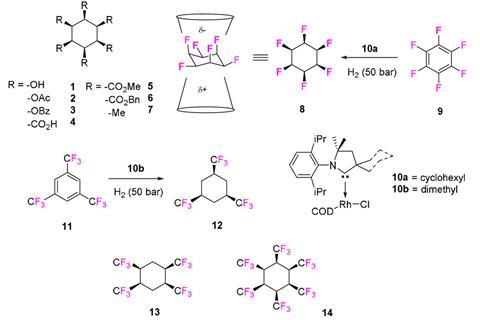 A cyclohexane molecule with six trifluoromethyl groups all sitting on the same side of the ring is the most sterically convoluted hexa-substituted cyclohexane ever made. The compound is extraordinarily polar as the ring’s two faces have very different properties: one side is highly electronegative while the other is electropositive.

Eight other all-cis hexa-substituted cyclohexanes have been synthesised so far, including a hexafluoro and a hexamethyl one. The latter had been the most sterically demanding case so far, as indicated by the molecule’s splayed chair structure. Enter 1,2,3,4,5,6‐hexakis(trifluoromethyl)‐cyclohexane. Because the CF3 group is even larger than the CH3 group, the chair structure becomes even more splayed, pushing the substituents from their ideal 90° angle to almost 111° on average.

The compound was created by a team of chemists in the UK, Germany and Estonia in a two-step, but nevertheless tough, synthesis starting from hexaiodobenzene. After a copper-catalysed reaction converts all iodine substituents into CF3 groups, hydrogenation proceeds with help of a rhodium catalyst – a reaction that takes two weeks in an autoclave held at 60°C at 60bar of hydrogen, yielding only 13% product. An intricate column chromatography purification was required to remove the byproduct in which one of the CF3 groups is replaced with a CFH2 group.

While the compound has no practical applications, it is unusually polar. The side facing the 18 fluorine atoms has a large and diffuse electronegative area. The hydrogen side has a more concentrated electropositive area. Toluene associates with the positive hydrogen face, as does acetone, through hydrogen bonding of its carbonyl oxygen. The positive face also has an affinity to chloride ions.