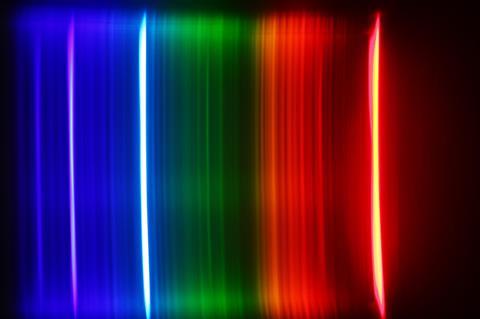 To identify substances, chemists regularly rely on materials’ unique spectroscopic fingerprints – but now US scientists have shown some methods might be amenable to forgery. In particular, when chemical systems are stimulated by pulses from ultrafast lasers their response leads to emission of radiation at many ‘high harmonic’ wavelengths. Herschel Rabitz’s Princeton University team has mathematically shown that suitably shaped pulses can make any system mimic high harmonic emissions considered characteristic to another.

Rabitz’s team was already exploiting the reverse phenomenon – tailoring pulses to help distinguish very similar molecules. They then wondered whether ultrafast lasers could make lead look like gold for a femtosecond, which is 1 x 10-15 seconds, or a quadrillionth of a second. This harnesses how a laser’s electromagnetic field interacts with electrical charges of nuclei and electrons, effectively pushing them around.

‘In ordinary spectroscopy you push very gently to see a fingerprint,’ Rabitz says. ‘We push harder and made particles do things they wouldn’t ordinarily do. It’s not where one thinks of spectroscopy as individual spectral lines.’ The scientists considered induced dipole spectroscopy, pushing charged particles until they become highly polarised into unusual off-resonance states. ‘These charged particles start shaking, and when they shake they radiate,’ Rabitz explains.

Previously, scientists had mathematically explored tailoring laser pulses driving polarisation in order to change emitted signals, without establishing the limits of what was possible. However, Princeton graduate student Andre Campos and senior scientists Denys Bondar and Renan Cabrera had a key insight. Prior efforts had considered that there were a finite number of position and momentum states an electron can exist in, but in fact the number of such states is infinite. This allowed the team to show how to tailor laser pulses to ‘spit out exactly the same signature’ as arose from another distinct chemical system.

Paul Corkum at the University of Ottawa, Canada, likens the idea to noise-cancelling headphones, where speakers emit signals that cancel unwanted noise but leave what you want to hear. ‘If you know the mimic signal that you wish to achieve, then you can find a means to cancel any other signal from a molecule by only adjusting the input pulse,’ he says. ‘Mimicry will provide a new approach to spectroscopy where molecular information is encoded in the input pulse that is needed to produce a predetermined output.’

‘The research is also particularly interesting because it highlights the complexity of nonlinear dynamics of single atoms and molecules,’ says Kurt Jacobs from the US Army Research Laboratory. ‘The ability of nonlinear dynamics to take similar signals and differentiate them has many applications in information processing. It may even be possible to use single atoms or molecules to perform complex tasks such as speech recognition.’

‘Seeing this work in an actual experiment would be incredibly beautiful,’ comments Martin Schultze from the Max Planck Institute of Quantum Optics in Germany. ‘High-harmonic radiation is the starting point of attosecond spectroscopy. Once laser pulses synthesised according to the quantum control guidelines presented in this paper become available, higher photon energies, shorter pulse durations and higher intensities can serve novel experiments.’

Demonstrating experimental feasibility is something Rabitz says he would now love to do. The behaviour could even control reactivity. ‘It’s possible to take a molecule or atom and push it with a field to induce chemically active behaviour not otherwise obtainable,’ he asserts. The team even calls its pulses ‘photonic reagents’. ‘They’re the analogue of chemical reagents, since they interact with matter electromagnetically just as matter interacts with itself,’ Rabitz says. ‘You can’t buy a bottle of them, but for a femtosecond you can make them.’