A team of materials scientists has developed an innovative nano-scale power supply which is fuelled by ultrasonic waves. The scientists predict that their nanogenerator could power the next generation of nanomachines - opening up hundreds of applications in the medical and technology industries.1 The generator relies on piezoelectric zinc oxide nanowires that are both durable and flexible. The team, based at the Georgia Institute of Technology, Atlanta, US, had already proved that an array of these nanowires generated small electrical charges when bent or deformed.2 Now, they have managed to harness that electricity into a useful power source. 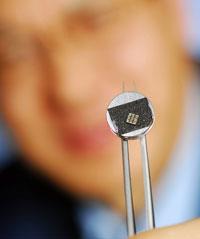 They built the generator by placing a specially designed zigzag-shaped electrode on top of the zinc oxide nanowire array. When hit by ultrasonic waves or vibrations, the electrode (made of silicon coated with platinum) rapidly moves up and down, causing the nanowires to repeatedly compress and flex, producing power. Because different wires are bent at different times, the movement generates a steady direct current (DC) output in the nano-Ampere range.
So far, the nanogenerator has run continuously for more than an hour. Driven by ultrasonic waves or vibration, nanogenerators like this have the potential for self-sustaining power by harvesting energy from the environment, the scientists suggest. In the same way that a self-winding watch can extract electrical energy from movement, nanogenerators could potentially run forever on normal levels of environmental vibrations.
Zhong Lin Wang, who leads the research team, told Chemistry World, ’The concept and prototype technology established by the DC nanogenerator has already set a platform for developing self-powering nanosystems. There is potential for medical application, such as implantable in-vivo biosensing of blood pressure, blood sugar and even cancer. The technical applications include wireless and remote sensing of gases or chemicals, nanorobotics, microelectromechanical systems and sonic wave detection.’ 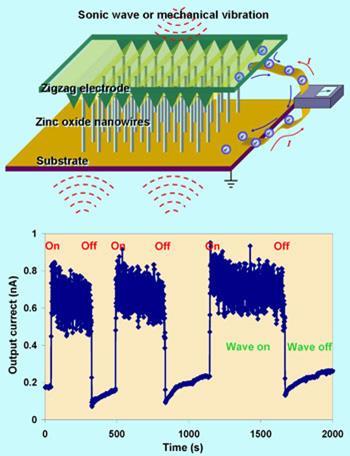 Schematic (top) showing the direct current nanogenerator. The lower plot is the output from a nanogenerator when the ultrasonic wave was on and off

The team plans to continue enhancing their nanogenerators by optimising the growth of the zinc oxide nanowires, to ensure they have a uniform size and distribution over the surface of the array. Their goal is to increase the output voltage to more than 0.5 Volts so that the nanogenerator can be used in practical applications. With continued research, Wang believes that in just three years we could be seeing nanomachines powered by such generators in real-world devices.
Lewis Brindley