Dimethyl sulfide links ocean acidification and climate change and could push up global temperatures by 0.5°C by 2100 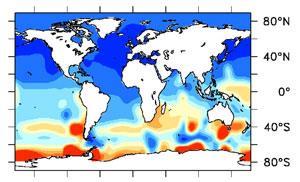 A link between the world’s oceans’ pH and climate change that has, until now, passed unnoticed could dramatically speed up global warming by lowering production of a smelly molecule important for cloud formation. This means that humanity’s CO2 emissions could warm the Earth by an additional 0.5°C by 2100.

As the oceans absorbs excess CO2 produced by humans, they are becoming more acidic, which affects the biology of marine ecosystems. The upshot of this may be lower levels of dimethyl sulfide, a by-product of phytoplankton ecosystems, released into the air. As dimethyl sulfide plays an important role in seeding clouds, lower atmospheric levels of the chemical could mean fewer clouds reflecting the sun’s energy and, therefore, a hotter Earth.

Until now, anthropogenic CO2 has been seen as having two distinct effects on the planet: the greenhouse effect and ocean acidification. Jean-Pierre Gattuso, scientific coordinator of the European Project on Ocean Acidification, who wasn’t involved in this study, says that around 10 gigatonnes of CO2 are released by human activity every year, of which a quarter is absorbed by the oceans. In future, he says, the effects of ocean acidification will have to be considered when predicting temperature rises.

‘This chain of impacts … nobody has reported on this before,’ says Gattuso. ‘The increase in temperature they report is gigantic.’ However, he feels that more research needs to be done, as there is not yet enough information, adding that the paucity of data has meant some significant assumptions. ‘They use arctic communities and extrapolate this response to the whole ocean.’

The study by Katharina Six of the Max Planck Institute for Meteorology, Germany, and her group brings together a huge range of disciplines, which may help to explain why the link between ocean acidification and rising temperatures has gone unnoticed. Six and her team used an Earth system model (ESM), which combines circulation models of the atmosphere and ocean, with sulfur cycle and carbon cycle models. Many of these computations have been honed for years, but functions linking low pH with lower dimethyl sulfide production are still in their infancy.

Six says that the factors affecting dimethyl sulfide production are very complex. The trend of lower pH leading to lower dimethyl sulfide production is real but ‘how strong it is is an open question’, she adds. ‘We definitely need more datasets, especially from the subtropics and tropical areas. On the other hand the datasets we have [in the polar and temperate regions] are in the areas where we expect the biggest change in pH, as the polar oceans are absorbing most of the CO2.’