A new type of x-ray microscope allows scientists to peer inside nanodevices without opening them up. High-resolution scanning x-ray diffraction microscopy, created by a Swiss research team, combines the penetrating power of scanning transmission x-ray microscopy (STXM) with the high resolution of coherent diffraction imaging (CDI), enabling buried nanostructures to be studied.

STXM uses a focused x-ray beam to penetrate the sample and probe the interior of materials. The intensity of the x-rays passing through a material is recorded as a transmission map and the resolution of the image is limited to the size of the x-ray focal spot. CDI also uses x-rays but reconstructs sample images from the two-dimensional distribution of the scattered rays.

Now the Swiss team, led by Franz Pfeiffer at the Swiss Federal Institute in Lausanne (EPFL), has developed a method in which the sample is scanned through a focal spot of x-rays and a full diffraction pattern is collected at each point along the specimen. An algorithm then combines the diffraction information to produce one x-ray micrograph. This overcomes the focal spot resolution limit of the x-rays and consequently, buried objects less than 50nm in size can be seen. 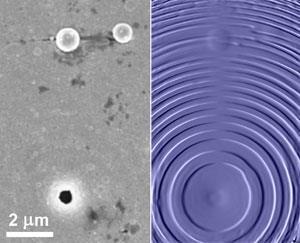 The team has successfully tested the new technique by imaging a hidden Fresnel zone plate - a device consisting of radially symmetric rings which is used to focus light - under a layer of gold.

’This means we can study semi-conductor devices such as computer chips without having to open them up,’ says team member Pierre Thibault from the Paul Scherrer Institute in Villigen, Switzerland. ’The technique could be combined with spectroscopy and fluorescence to give information on the composition, oxidation state or the local atom arrangement in the bulk of the material,’ he says. ’Also, by tuning the x-ray energy so that it is close to an atomic ionisation energy, the chemical composition of a sample can be probed.’

High-resolution scanning x-ray diffraction microscopy has caught the imagination of scientists working in imaging. Torsten Hegmann, associate professor at the University of Manitoba in Winnipeg, Canada, says, ’The technique is an important development and the high resolution X-ray micrographs will complement scanning transmission electron microscopy images for metamaterials such as nanocomposites.’ Meanwhile, Timm Weitkamp of the European Synchrotron Radiation Facility in Grenoble, France, thinks that it could ’revolutionise the field of X-ray microscopy’.