Uncovering the secrets of tea

Tea is known for being beneficial for our health, but how exactly do the compounds exert their benefits?

Everyone knows that a cup of tea is good for you, but the exact reasons for this are not clear. To discover the fundamentals of tea’s health benefits, scientists in Germany have investigated the interactions of compounds from tea with cells on a molecular level.

Both green and black tea contain  around 30,000 polyphenolic compounds, some of which have been shown to have numerous health benefits, including reducing cardiovascular disease, osteoporosis and inflammation. Despite their positive effects, which have been seen in epidemiological findings and clinical trials, their exact biochemical mechanism is still not clear. Polyphenols can act as antioxidants, and for a long time this was thought to be the reason for their health benefits. However, recent studies have shown that this only plays a small part in their effectiveness. 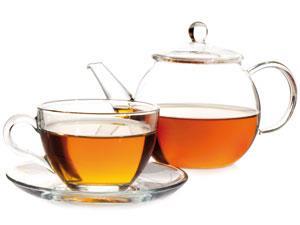 Flavanols from tea accumulate in the cell nucleus, which could help in understanding their beneficial health effects

The scientists found that the polyphenols bound to the proteins and the DNA, but also that two major polyphenols showed selectivity for binding to quadruplex DNA over double-stranded DNA. Quadruplex DNA makes up the telomeres at the ends of chromosomes, which protect the chromosome from deterioration (for example, through ageing). ‘One can speculate that any compound able to bind to the quadruplex stabilises it and prolongs the life-span of an organism,’ says Kuhnert. ‘Additionally, the telomere plays an important role in cancer therapy.’

Susanne Henning from the Centre for Human Nutrition, University of California Los Angeles, US, comments: ‘It appears to be highly sophisticated chemistry. However, as the authors point out, this is only an in vitro study. There are limiting factors for the tea polyphenols being taken up and highly metabolised and excreted rapidly in the urine.’ Kuhnert agrees: ‘For this work, it needs to be urgently established whether any phenolics accumulate in the cell nucleus of human cells under dietary settings.’

The team hopes that this work will spark new avenues of research in tea polyphenols and are planning to continue their work on the characterisation of processed foods, identifying compounds with interesting biological activities. They are particularly interested in black tea, caramel and roasted coffee, and are just beginning to investigate cocoa, which is even more complex than tea.