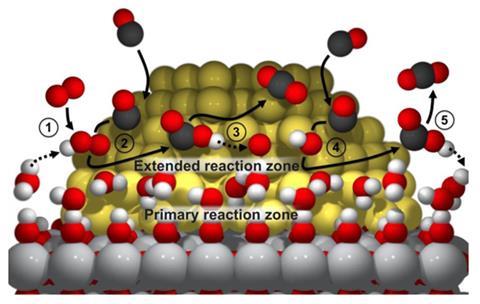 US researchers believe they have uncovered the means by which gold nanoparticles sitting on a support of titanium dioxide can oxidise carbon monoxide at low temperatures. The reaction was first demonstrated around 25 years ago, but there has since been unresolved debate about the precise catalytic mechanisms involved.

It was accepted that hydroxyl groups on the oxide support played a role and that an increase in the concentration of water in the system increased catalytic activity, but a mechanism remained elusive. Now, a team led by Bert Chandler of Trinity University in San Antonio, Texas, and Lars Grabow of the University of Houston, has provided experimental and computational evidence to suggest a reaction pathway that accounts for most of the observations seen so far.

The researchers carried out the oxidation with low pressure water vapour and measured the rate of catalysis. They then substituted the water for heavy water (D2O) and showed that the reaction rate was significantly lower. ‘This provided us with strong evidence that a proton is transferred in the key reaction,’ says Chandler. To determine the source of the proton, the team gently dried the catalyst, removing water but not the hydroxyl groups attached to the support. Activity tailed off markedly, indicating that the source of the proton was surface-adsorbed water rather than the OH groups on the support, which serve to anchor the water molecules in a thin layer

The team proposes that a proton from water activates gold-bound oxygen resulting in a gold-OOH species. This species reacts with carbon monoxide that is weakly bound to the gold nanoparticle, yielding gold-COOH, which decomposes via a proton transfer to water. ‘I think we are proposing the most complete mechanism, which can explain a lot of the data in the literature as a unifying theory,’ Chandler says.

Other experts are impressed. Gabriel Veith of the Oak Ridge National Laboratory in the US says: ‘These results are exciting for a number of reasons. First, they could explain the large variation in reported activities for nominally the same size gold clusters prepared in different laboratories. Second, these results could possibly provide a basis to explain the apparent support effect observed for gold catalysts, namely why activity on acidic supports like silicon dioxide and tungsten trioxide is so low, while basic supports such as magnesium oxide work really well. Third, they highlight that every lab should be quantifying water content in their reactant and product streams. Fourth, these results give those in the field a number of new “knobs” to turn to optimise catalytic activity.’