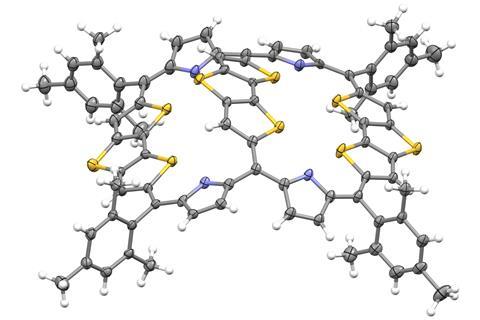 The first compound that shows a peculiar form of resonance stabilisation known as bicycloaromaticity in its ground state has been made by an international team of researchers.

Bicycloaromaticity is similar to Möbius aromaticity – both occur in compounds with 4n π-electrons rather than the usual [4n+2] electrons found in Hückel-aromatic molecules like benzene. The former, however, appears only in triplet molecules, which, like oxygen, have two unpaired electrons. This rare form of π-electron stabilisation has only been observed a few times and always in short-lived high energy species.

The new compound, a large bridged porphyrin, is the first one that is bicycloaromatic in its ground state. Like most bicyclic molecules, it starts off with dual aromaticity – it has two competing π-electron systems that exist independently from one another. But after losing two electrons in an oxidation reaction and forming a biradical, the molecule’s aromatic systems merge, creating a single 40 electron π-system distributed over two rings.

While the compound doesn’t have any practical application yet, it gives scientists the opportunity to study a little understood form of aromaticity.