Making cheap gasoline from biomass is a step closer, thanks to a new catalyst developed in the US. The catalyst - which is made from metal nanoparticles and carbon nanotubes - straddles the boundary between water and oil and could greatly help in ’upgrading’ crude biomass into useful fuel.

Large quantities of biomass are produced each year, such as waste plant material from farming and the paper industry, and biodegradable home waste. These mixtures can be heated to produce a sticky liquid known as ’bio-oil’, which needs further refinement before it can be put to use.

Bio-oil is primarily made up of compounds derived from cellulose and lignin - and in order to be suitable for fuel, they need to be deoxygenated and converted to roughly the same size. But performing these reactions is difficult because high levels of water are naturally present in the oil. This typically produces an emulsion, with smaller molecules dissolving in the water phase, and longer molecules in the oil phase.

Researchers led by Daniel Resasco at the University of Oklahoma have now solved this problem with a catalyst that seeks out the boundaries where oil and water meet and enables reactions in both layers at the same time. The catalyst is made from magnesium oxide nanoparticles with carbon nanotubes grown between them.

’The metal oxide nanoparticles are hydrophilic and orient the catalyst towards the water, whereas the nanotubes are hydrophobic and orient towards the oil,’ explains Resasco. ’On the water side, we can attach a condensation catalyst that encourages formation of carbon-carbon bonds to enlarge the length of carbon chains,’ he adds. ’Crucially, once the chains become long enough, their solubility in water decreases, and they migrate to the oil phase.’ 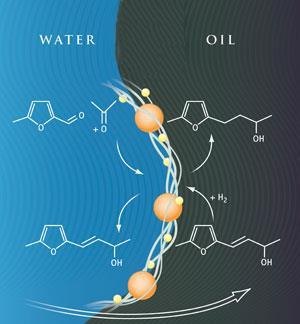 Carbon nanotubes (white) were grown on metal oxide nanoparticles (orange). The particles are drawn to oil-water interfaces, and the addition of palladium (yellow) creates catalysts that can work in both phases

Palladium nanoparticles are also integrated into the structure - enabling the mixed hydrocarbons in the oil phase to undergo deoxygenation that makes them compatible with conventional fuels. Importantly, the catalyst stays in a solid phase and can easily be filtered off and re-cycled.

Robert Brown, a biofuels expert at Iowa State University, US, thinks that the work is a ’tremendous advance’ towards the goal of producing hydrocarbon fuels from biomass. However, he notes that the research is still in the early stages. ’Once you start putting catalysts into real bio-oil, all bets are off,’ he told Chemistry World. ’Contaminants might poison the catalyst or clog up the pores - so there is a lot of work to be done.’

But Brown is confident that this process will be key to future developments. ’Bio-oil has a very compelling case for future fuel production,’ he says. ’We have recently performed an economic analysis that suggests the bio-oil route to synthetic gasoline is one of the most cost-effective that could be envisioned.’

’The unusual functionality of the catalyst may also find applications in the production of other chemicals,’ says David Cole-Hamilton at the University of St. Andrews, UK. Instead of repeated cycles of reaction and separation, compounds could instead switch between oil and water layers after consecutive reactions.