The Drosophila melanogaster species of fruit fly has marked similarity to humans in its choice of sweeteners, a fact exploited by a team led by Anne Rae at the Commonwealth Scientific and Industrial Research Organisation in Queensland to aid the search for new sweeteners as demand for healthier sugar alternatives grows.

’Many people are not happy with the chemical basis of the high-intensity sweeteners such as Aspartame, and many of the carbohydrate based sweeteners tend to have digestive side-effects,’ explains Rae. ’There is a need to find new sweeteners with better properties.’

The team exposed fruit flies to solutions of a range of traditional sugars, including glucose and sucrose, and a range of alternative sweeteners. The sugars and sweeteners were presented to the flies in pairs, one mixed with a red dye and the other blue. After the feeding, the dye could be seen through the fly abdomens, with higher incidence of a particular colour revealing which sweet solution had proved more popular among the flies. The results showed that broadly speaking, the fruit fly preferences mirrored those of humans, suggesting that fruit flies could be useful as a behavioural assay for sugar structure preference in humans. 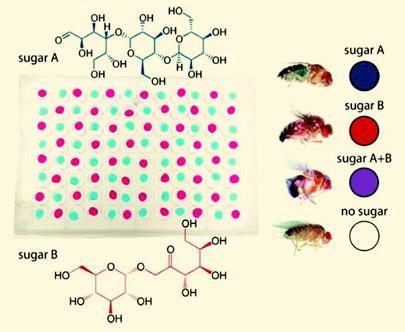 Paul Breslin at Monell Chemical Senses Center in Philadelphia, US reported in 2008 that fruit flies and apes have evolved taste detectors with very similar preferences. ’I am in favour of this approach,’ he says. ’These authors are using the same idea [as we used] but to test whether the fruit fly’s preference for a novel sweetener might indicate its potential success in humans.’

Among the 19 sugars tested, fruit flies favoured gentiobiitol, a reduced ?-glucobiose, the most. Future work will involve testing human response to gentiobiitol to see whether it could potentially be used in a novel sweetener.