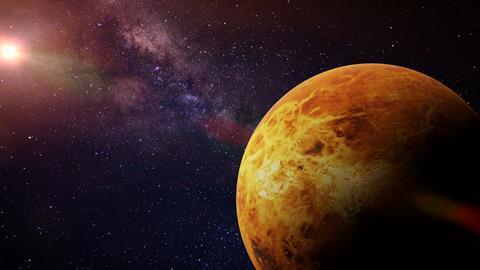 Researchers in China, Germany and the US have obtained experimental spectra of four S2O2 isomers at UV and visible wavelengths to settle a long-running controversy over the identity of the near-UV absorber in the atmosphere of Venus.

The cause of absorption in the Venusian atmosphere in the 320–400nm region has long-puzzled chemists in the field. Although a previous computational study suggested that a sulfur–oxygen species may be responsible for the enigmatic near-UV absorber, there had been no experimental determination to confirm the proposal – until now. 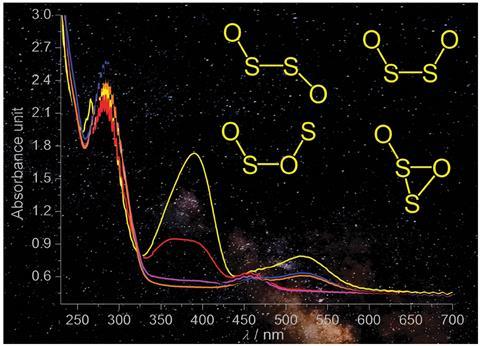 The near-UV absorber OSSO and its isomers

A team led by Peter Schreiner of Justus-Leibig University and Xiaoqing Zeng of Soochow University has experimentally confirmed the role of OSSO in the yellow atmosphere of Venus by spectroscopically characterising the photo-induced isomerisation of its isomers at cryogenic temperatures. By assigning the photolysis-induced transitions, they found that absorption peaks in the spectra of the anti- and syn-isomers matched measurements of the near-UV absorber made by the Pioneer Venus orbiter in the 1970s, with a cyclic-isomer contributing to transitions at 287nm.

The results will help researchers identify S2O2 isomers in the atmospheres of other planets.