Taxpayers should only back research that makes money or is academically exceptional, UK business secretary Vince Cable said today in his first speech on science.

Cable covered graduate careers, intellectual property and immigration as he outlined his vision at Queen Mary University in London, UK. He asked how the UK can ’do more with less’ but fell short of revealing the extent of cuts to the science budget. 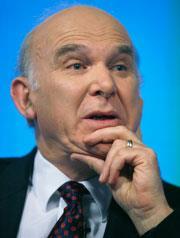 ’I regard the old debate about common room versus board room as tiresome and unproductive,’ Cable said. ’But there is no justification for taxpayers’ money being used to support research which is neither commercially useful nor theoretically outstanding.’

The speech comes ahead of the government comprehensive spending review - expected in October - which is likely to reduce the amount allocated to science. Earlier this morning the minister denied rumours of a 35 per cent cut in the science budget during a BBC interview, saying the figure was ’way in excess of what we’re talking about’.

In his speech Cable said that the UK economy was distorted, with ’too many top performing graduates heading straight for high finance rather than science and engineering’.

In a list of areas in which the UK is a world leader, he included regenerative medicine, plastic electronics, fuel cells and composite materials, adding that there is a case for ’building up’ these.

In addition, Cable said that more needed to be done in the area of intellectual property (IP).

He also talked about the benefits that immigration had brought to the US. ’Over 25 per cent of US high-tech start-ups in the last 10 years had at least one immigrant founder,’ he said, adding that students from overseas that go on to work in the UK supply ’vital skills to industries that desperately need such talent if they are to grow and innovate - passing on immeasurable benefits to the whole economy’.

A permanent annual UK cap on immigration will come into effect in April 2011.

’We are pleased to see several key aspects of Vince Cable’s thinking: a focus on globally competitive excellence; productive collaboration with industry; IP generated and kept here in the UK; and the need to keep the UK open to top-class researchers from wherever in the world they originate,’ said Richard Barker, director general of the Association of the British Pharmaceutical Industry.

Others, however, are not as positive about Cable’s stance. ’Other nations, including the US, are raising their expenditure [on science] at the same time as our government plans to cut ours,’ said Martin Rees, president of the Royal Society. ’This will make the UK less attractive to mobile talent. And it risks sending a signal to young people that the UK is no longer a country that aspires to scientific leadership. It is sad that this government appears willing to risk one of the few areas where the UK has a genuine competitive economic advantage - one which, when lost, could not be readily recovered.’