Water trapped in a sugar crystal

A technique used to study polymers is helping researchers study how a sugar protects some organisms from dehydration.

A spectroscopy technique commonly used to study polymers has helped shed light on how a sugar protects certain organisms from dehydration, say British and Swiss researchers.

A number of organisms, including microscopic arthropods called tardigrades (also known as water bears), use the disaccharide trehalose to protect their cells from damage caused by freezing and dehydration. Desiccated tardigrades can live for years in suspended animation. 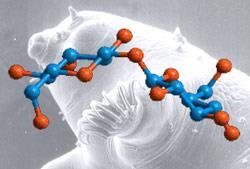 Trehalose keeps animals like this tardigrade alive in drought conditions

Scientists think that trehalose helps stabilise cell membranes, but know little about the mechanisms involved. A concerted effort is underway to find out more about these mechanisms, especially as trehalose could potentially be used to help preserve food and vaccines from extremes of temperature and humidity. Last year, Salvatore Magaz? from the University of Messina, Italy, discovered that the protective effect of trehalose depends on it forming a unique crystalline structure with water.

Now, a team of scientists from the University of Bristol and the Nestl? Research Center, Lausanne, has probed this crystalline structure using positron annihilation lifetime spectroscopy. The technique characterises the porosity of materials and has been used to measure the free space between polymer chains in polymeric materials.

The scientists, led by Job Ubbink from Nestl?, claim their analysis has provided the first clear evidence that trehalose locks away water as it transforms from a glassy state to a crystalline state. ’Trehalose has the unique property to self-stabilise [its] amorphous glassy state by locally capturing water in crystalline domains and thereby neutralising the undesirable properties of water in such systems,’ explained Ubbink.

But the work has failed to impress Magaz?, who claims that Ubbink and his team had exposed trehalose to temperatures that differ from those that it naturally experiences. He added that other analytical techniques, such as infrared spectroscopy, are better able to probe the interaction between water and trehalose.

Ubbink points out that since their investigation focussed on the structure of the system, rather than molecular interactions, their technique was entirely appropriate. He adds that all their measurements were backed up by established technqiues, such as wide angle X-ray scattering. In addition, he emphasises that the primary focus of the work was on conditions of direct relevance to the bioprotective function of trehalose.

This article has been updated to incorporate correspondence with Job Ubbink.

Just a spoonful of sugar

Chemists have developed new vaccine delivery systems that could do away with the need for refrigeration. Henry Nicholls looks at the implications