Water vapour has been detected in the dust cloud of a carbon-rich star, suggesting previously unrecognised photochemistry could be taking place

An international team of researchers has found evidence of water vapour within the inner regions of a carbon-rich giant star - something previously thought to have been impossible. The finding will lead to a major rethink of the chemistry that takes place in carbon-rich stars as they grow older and expand.

The researchers analysed spectroscopic data gathered by the Herschel Space Observatory from the star named IRC +10216 - an example of a so-called carbon star which is ageing, in astronomical terms, and expanding as it does so. The star is surrounded by a deep, sooty outflow of dust and gas, its circumstellar envelope.

To their surprise the researchers discovered dozens of spectroscopic lines corresponding to water vapour in a variety of states of excitation - each in turn representing water at a range of temperatures, and hence locations, within the warm envelope of the star. Previously it was thought that the chemistry of the envelope did not permit water to exist - with the excess carbon effectively mopping up any oxygen, precluding the formation of water. Water vapour was detected in 2001, but this was a single spectral line which corresponded to relatively cool outlying vapour. The speculation was that it arose from vaporisation of icy comets ’swallowed’ by the expanding envelope. 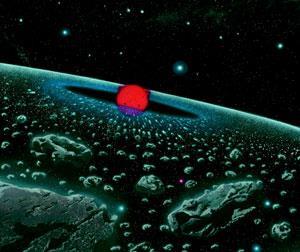 The chemistry of carbon-rich stars could need a rethink

’Clearly water is everywhere, so we have to think about other mechanisms that could give rise to this water,’ says team member Leen Decin, of the Catholic University of Leuven in Belgium.

Decin speculates that the physical form of the envelope could hold the key. Models of the circumstellar envelope assume that it is perfectly spherical and homogenous. However, recent images suggest that it is uneven and ’clumpy’ - more akin to clouds in the sky.

’This would mean that ultraviolet radiation could penetrate the gaps between the clouds,’ Decin says. ’This could induce new mechanisms of photochemistry deeper within the envelope, with the UV photons dissociating molecules containing oxygen. Suddenly you have free oxygen and with the most abundant molecule being hydrogen, water could be formed.’

Tom Millar, professor of astrophysics at Queen’s University Belfast, says that the detection of ’hot water’ in the star is ’highly unexpected and is a significant challenge to our understanding of the physical and chemical conditions in evolved stars.’ Millar adds, ’Astronomers will be considering how such a clumpy outflow arises from what is ostensibly a spherically symmetric star and whether such photochemistry can give rise to other, unique chemical tracers.’

Millar’s colleague Catherine Walsh notes, ’The detection of water deep within the envelope of this carbon-rich star is evidence that our understanding of how stars of this nature evolve during the latter stages of their life is incomplete.’