Ever wished that your waterproof jacket could actively remove water from the inside? Now, scientists in Australia and the US have coated a fabric so that it could do just that by transferring water exclusively in one direction. 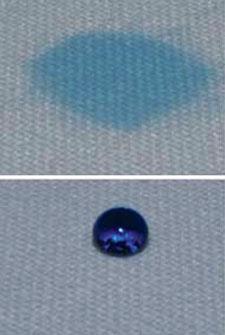 Directional transport of water is common in nature, where it is usually done by channel proteins that move water from one side of a membrane to another. However, most ’breathable’ clothing membranes rely on temperature and concentration gradients to push water vapour from sweat through to the outside. Water can also be moved about by exploiting mechanical pressure gradients, or by making use of surface tension differences. However, these possibilities have only been studied on flat surfaces and not in porous materials like fabrics.

Tong Lin at Deakin University, Australia, and his colleagues coated a porous polyester fabric on both sides with a mixture of titanium dioxide and organosilanes. This combination is similar to a common coating for so-called superhydrophobic surfaces, which strongly repel water. They then shone UV light on one side of the fabric, which initiated a reaction that changed the coating. Because the effect of the light diminishes the further it penetrates into the fabric, a gradient forms from one side to the other. The side without UV light remains hydrophobic while the other side becomes hydrophilic. When water is dropped onto the hydrophobic side of the fabric, it is quickly transported through the polyester to the hydrophilic side, where it then stays.

The team was surprised by the findings as the researchers were simply aiming for a fabric with different properties on each side: ’We found it has an incredibly different property: water proactively passes through the fabric from the superhydrophobic to the hydrophilic side, but not the opposite way unless extra pressure is applied,’ Lin explains. The team believes the simple coating technique could be used to produce high-performance fabrics for sports and military use, and even industrial membranes.

Howard Stone, who works on surface wetting and flow at Princeton University, US, is impressed by the work. ’I would have expected this strategy to work so long as the contact angles [the angle the droplet makes with the surface] went from 90 degrees toward zero degrees, but the authors show this works even when the initial contact angle on the hydrophobic side is greater than 90 degrees.’ He suggests that the unexpected behaviour could be due to gravitational influences but says it needs further investigation.