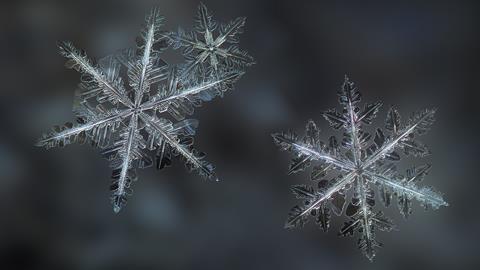 How to capture your own snowy wonders at home

Winter is upon us and – perhaps – a little seasonal snow. But as the temperatures cool and the mornings get frosty, it’s worth taking a closer look at what’s happening when water freezes and tumbles from the sky.

How do snowflakes form?

Two words: supercool and supersaturated. The air needs to be both to form snowflakes. It’s a delicate process and when it goes wrong you get things like hail, sleet or graupel.

Depending on the temperature, air can accommodate a specific amount of gaseous water – the hotter it is the more water vapour can be in the air. When the temperature drops, the water doesn’t necessarily always condense (form liquid droplets) or deposit (form solid particles) immediately; instead, air can reach a relative humidity above 100%, becoming supersaturated.

Water only freezes at 0°C if it has some incentive to do so. Tiny, microscopic bumps in the surface container the water is cooled in, or dust particles in supersaturated air, are usually provide enough this push. If this doesn’t happen, water becomes supercooled – remaining as liquid well below its freezing point. When supercooled liquid water is disturbed it freezes instantly and, in supersaturated air, this results in snowflakes.

While these seem like quite unlikely conditions to occur on a regular basis, luckily they happen quite often in those large aerosol heaps floating in the sky we call clouds. Inside snow clouds, supercooled water freezes around a dust particle to form the first tiny snow crystal. It then attracts more water from the supersaturated air around it, which crystallises into intricate shapes. 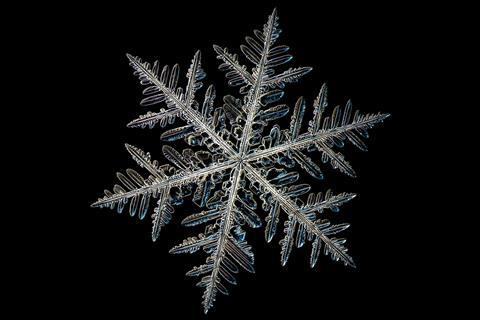 What’s the difference between snow, rime, graupel, hail and sleet?

Rime forms when water droplets freeze to the surfaces of objects. This often happens at ground level, but every solid surface can attract rime – even snowflakes. When lots of rime forms on snowflakes, they can stick together and fall from the sky as slushy blobs. This state is called graupel, a name as pleasing as the feeling of standing in a shower of the stuff.

Hail and sleet, on the other hand, are hard irregular ice pellets quite different the intricate six-pointed snowflake structure. Hail usually falls in warm weather during heavy thunderstorms, whereas sleet is a cold-weather phenomenon. Both hail and sleet begin their life as water droplets that suddenly freeze when coming into contact with a sub-zero cloud layer, though sleet can also start off as snow that melts and then refreezes.

Why do snowflakes always have six sides?

In 1611, German astronomer Johannes Kepler proposed that some basic units that make up the crystal would form a hexagon due to the way they stack. He certainly had the right idea, even though it would be another 200 years until people found out that matter is made out of atoms and molecules. The simple, hexagonal arrangement of water molecules in ice is what gives snowflakes their six sides.

The six crystal facets reflect this molecular geometry. This is because some crystal surfaces have lots of free bonds to attach more molecules so to grow faster than those that are smooth and already saturated in bonds. 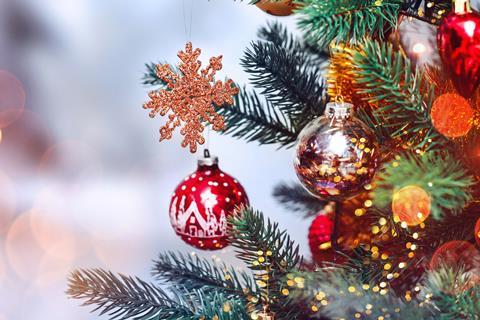 Wait. My Christmas tree has a pentagonal snowflake…

Sorry, Christmas decorations featuring pentagonal or octagonal snowflakes can be dismissed as scientific rubbish – they don’t exist. However, not all snowflakes end up being six-sided. Triangular snowflakes start out as hexagons, but air flow around the growing crystals lengthens alternating facets and shortens the other three to the point where the crystal becomes triangular. And when two hexagonal flakes stick together and grow as one crystal, you can even get twelve-branched crystals. 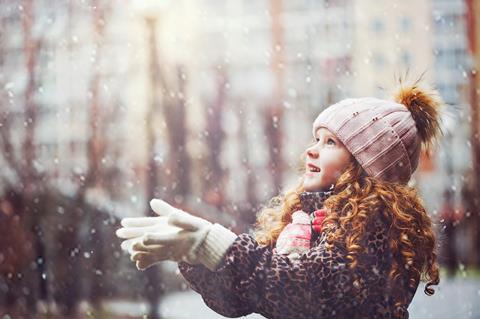 Japanese physicist Ukichiro Nakaya was the first to find out how a snowflakes’ shape tells the story of its formation. In 1930, he took up a promising research position – but when he arrived, he found out that the university had no money to buy any of the equipment he needed for his work on x-rays. What the area lacked in lab kit it made up for with an unlimited supply of snow. He started examining the crystals and making the first artificial flakes, which he grew on the tips of individual rabbit hairs.

Every snowflake starts off as a hexagonal prism – it can be short and flat like a six-sided coin or long and thin like a pencil. Eventually, the hexagon starts branching and, because its corners stick out a little more into the cold air, the water molecules waiting to freeze onto something attach to them, making them grow faster than the rest of the structure. Branching is what ultimately controls a snowflake’s intricate shape.

Why does every snowflake look different?

Throughout their cloud-bound production cycle, snowflakes are exposed to a range of different temperatures and humidities. As the crystal’s growth is sensitive even to the slightest changes in environment, the likelihood of finding two natural snowflakes that are exactly the same is very small. (In the lab, where conditions can be accurately controlled, scientists have managed to grow identical twin snowflakes.)

Nevertheless, people’s desire to find pattern in chaos means there’s a long tradition of trying to classify snowflakes. In 1675, German physician Friedrich Martens catalogued 24 types of snowflakes. In 1832, this number had grown to 86 types, which were described by Japanese daimyo Doi Toshitsura. Other, more recent classifications list even more. At last count there were well over 100 types – including the well-known stellar dendrites but also more unusual bullet rosettes or capped columns.

According to the Nakaya’s research, the largest – and arguably prettiest – dendritic snowflakes grow in very humid clouds at around –15°C. 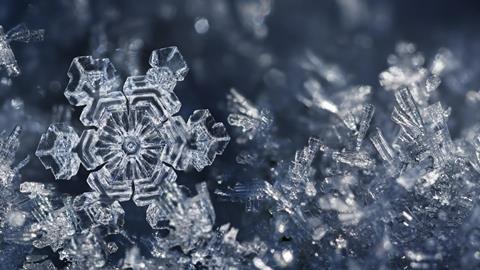 How can I make my own perfect snowflakes?

You either need a lot of patience like Nakaya – he managed to produce the first artificial snowflake three years after his first attempt – or a few thousand pounds for equipment. A £4000 refrigeration system and some £1500 temperature controllers are a bare minimum and, if you want to see and photograph your snowflakes, a high-quality microscope and camera system would also come in handy. This, alongside a solid knowledge of physics, is how Caltech researcher Kenneth Libbrecht makes his snowflakes – he even managed to grow one that measured over 1cm in diameter.

However, Libbrecht also developed a method for everyone to try at home, though it only gives you dendrites rather than proper snowflakes.

If you are lucky enough to live in a place where it snows regularly, why not try and preserve your favourite flake? All you need is some glass microscope slides, liquid superglue, a small paintbrush and some dark cardboard or cloth. Make sure all items are pre-cooled to below 0°C, either in the freezer or outside. Then lay out the cardboard or cloth and wait.

Once you have spotted a nice specimen on the cloth, pick it up carefully with the brush. Place it on the slide, add a droplet of superglue and a cover slip on top of this. Keep the whole thing in the freezer (or outside if it’s cold enough) until the superglue is dry, which takes at least two days. After that your snowflake can be kept at room temperature as the first part of your collection.