What's in store for the chemicals industry?

Forecasters assess the prospects for 2009 and beyond

Sizing up their prospects at the beginning of 2008, chemical companies knew economists were warning of an imminent recession. But the swiftness of the year’s global downturn took many by surprise.

Indeed, the chemical industry in Europe and North America is set to record its biggest declines in output for over two decades during 2008 and 2009, as it struggles with a sharp drop in demand for its products. In anticipation of a possible prolonged downturn, chemical companies such as Dow and Dupont are already announcing permanent job losses. 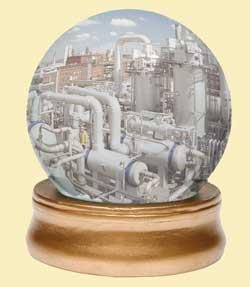 Gazing into the chemical industry’s future

Forecasters are expecting that the decrease in chemicals production will be relatively short lived in the key regions of North America, Western Europe and Japan. After diving steeply in the fourth quarter of 2008, output is likely to start to pick up again in the second half of 2009. But it will take much longer before the industry starts to grow at the rate it has in recent years.

’It won’t be the same as in the early 1980s, which was the last time there was such a big drop in chemicals output,’ explains David Thomas, an economist specialising in chemical and consumer goods at UK-based consultancy Oxford Economics. ’Then demand took off and chemicals output went up by 10 percent in one quarter after government controls to curb inflation were lifted.’

’This time there are big structural problems,’ he continues. ’Governments have had to borrow so much that their huge debts are going to slow down economic growth. We believe world GDP (gross domestic product), which will be going up by around 0.5 per cent next year, will not reach 2007 growth levels (4 percent) until 2012.’ Even the fast-expanding economies of China and India have seen dramatically slower growth in industrial production (a marker of chemicals output).

"It won’t be the same as in the early 1980s, which was the last time there was such a big drop in chemicals output. This time there are big structural problems." - David Thomas, Oxford Economics

Global chemicals output is likely to follow a similar path to world trade. In its latest economic outlook, the Organisation for Economic Development and Co-operation (OECD), the Paris-based think tank for the world’s rich nations, forecasts that after dwindling through most of 2009, world trade growth will almost double between the end of 2009 and the last quarter of 2010.

In similar vein, the American Chemistry Council (ACC), representing US chemical producers, forecasts that global chemicals production will only dribble upwards next year before growth almost doubles to 3.3 per cent in 2010.

But response to a dismal series of economic indicators in late November and early December, Oxford Economics has cautioned that, instead of its earlier prediction of a 0.5 percent rise in global chemicals output next year, there could be a slight decrease. Nonetheless this won’t match the 1980s, when at one point global chemicals production fell by over 2 percent. 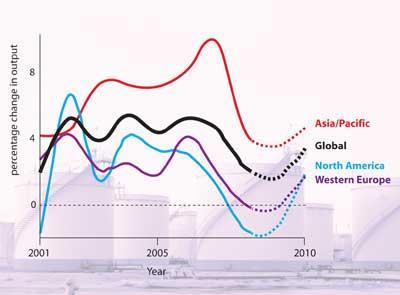 The ACC’s assessment of chemicals output in the US is bleak. A moderate recession is the minimum the country can expect, it says, but a more severe recession ’of longer duration and depth and higher unemployment’ is possible.

It predicts that US chemicals output (all figures excluding pharmaceuticals) will fall by 3.1 percent in 2008 against the previous year and by a further 3.6 per cent in 2009, before clawing back 1.2 percent in 2010.

But there is also an alternative, more pessimistic scenario based on a deeper and more prolonged recession in the US and bigger declines in housing activity, automotive sales and industrial production. In these circumstances, chemicals production would plummet by 5.7 percent in 2009 and rise by only 0.3 percent in 2010. US chemicals output dived by 6.9 percent in 2001, the time of the last economic downturn, but bounced back to 6.7 percent growth in 2002.

The European Chemical Industry Council (Cefic), the EU’s chemicals trade association, is less sombre than its US counterpart. This is mainly because, outside of the UK and Spain, Europe has not experienced the same sharp drop in house and automotive sales as in the US. Cefic expects that chemical exports from Europe will be stronger than those from the US.   It is predicting that in 2009, chemicals output will drop by only 1.3 per cent, compared with growth of 0.6 per cent in 2008 and 2.2 per cent in 2007.

"We’re optimistic about the medium and long term outlook in Germany. The industry in recent years has gained a lot in productivity and developed a lot of new technologies. It’s not as bad as it seems." - Henrik Meinche, German chemical industry association (VCI)>

In the wake of declining exports and construction activity in China, the country’s GDP growth is expected to be the lowest in two decades, according to the World Bank. And chemicals output will ease considerably too. The ACC predicts that chemicals production in China will only increase 9.7 per cent in 2009, less than half the average increase seen every year between 2005-07.

India’s chemicals output will register a similar steep fall in growth, from an average 10 percent in 2007 and 2008 to 6 percent next year, according to Oxford Economics.

A more immediate concern of the chemical industry, particularly in North America and Europe, is the current bout of destocking - where customers are using up their stores of chemicals and holding off from buying any more - which has made the fragile state of demand far worse than the recession might suggest.

Chemical customers had been building up inventories through most of 2008 as chemicals got more expensive. The price increases were designed to compensate for increasing energy and feedstock prices, many of which were derived from expensive crude oil.

When crude oil prices started to collapse in the autumn, feedstock prices followed suit. The cost of benzene and styrene nosedived by 50 per cent and low density polyethylene by 40 percent in around a month. With prices dropping so rapidly customers stopped buying, deciding to use up the chemicals they had bought at higher prices.

’Demand has fallen off a cliff because of destocking,’ says Alan Eastwood, economic advisor to the UK Chemical Industries Association (CIA). ’The car companies obviously want to keep their inventories down because it’s another way of reducing working capital. All this can have a big effect on the chemical industry. We are top of the supply chain. There comes a point when purchasing companies have to start buying again, which hopefully will start relatively quickly.’

Chemical companies have been temporarily closing down large numbers of production plants because of the severe extent of destocking. For instance, BASF is shutting down 80 plants and reducing output at another 100. Dow is idling 180 - over a quarter of its total.

’Destocking should begin to stop in the second quarter of next year,’ says Thomas. ’But the underlying demand will still be weak so there will be no reason to restock again. Instead chemical purchasers will buy just in response to demand. There will be so much spare capacity around there will be no need to start restocking.’

Economists and planners in the chemicals sector are pointing out that the economies of the developed world have been due for a recession, which generally occur around every 10 years. This one is more severe than others because it follows a boom based on easy credit. But once demand revives again there will be plenty of opportunities for strong growth in relatively new chemical segments.

’After four years of strong growth, we will have negative growth of 2.5 percent next year in chemicals but there’s nothing dramatic about that,’ explains Henrik Meinche, senior economist at the German chemical industry association (VCI). ’We’re optimistic about the medium and long term outlook in Germany. The industry in recent years has gained a lot in productivity and developed a lot of new technologies in areas like nanomaterials and chemicals and materials for growth sectors like electronics and clean energy. It’s not as bad as it seems.’