Why can we walk on custard?

As once famously demonstrated on a UK television show (video), you can walk over a swimming pool filled with custard. Two US physicists have now explained why. 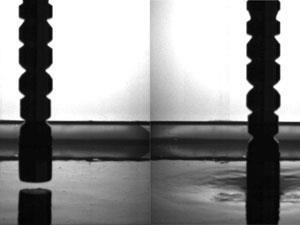 Being a mixture of cornflour and milk, with a dash a vanilla essence, instant custard consists of a dense suspension of microscopic particles. Such suspensions are well known to harden on impact, but no one really knew why. Most scientists thought it had something to do with a process known as shear thickening, whereby these suspensions become more viscous when a shear force is applied to them.

The problem with this explanation, though, is that shear forces are applied parallel to the suspension, whereas an impact, such as that produced by walking over custard, applies a force at right angles.

‘All references to this phenomenon in the literature were invoked in tiny shear experiments and this is very different from running on the surface – imagine sliding an object across the surface instead of smacking the object into the surface,’ explains Scott Waitukaitis at the University of Chicago, US. ‘What’s more, these experiments always exhibited a maximum in stress which they could not exceed, suggesting that the suspensions were 10–100 times too weak for running on the surface to be possible.’

So, together with his colleague Heinrich Jaeger, Waitukaitis decided to investigate what happened when he dropped an aluminium rod onto 25 litres of custard or, more accurately, a suspension of cornflour and water. To do this, he studied the impact using a variety of different techniques, including high-speed video, an accelerometer, a force sensor and x-ray videography.

What he discovered was that the force of the impact squashed the particles in the suspension together, forming a depression in the surface and an expanding solid region of jammed together particles below this depression. Just like the way in which a snowplough jams snow particles together into a solid mass. As a result, the falling rod initially comes to an almost complete halt on the surface of the suspension, before slowly sinking as the solid region gradually ‘melts’ away.

‘The impact causes the particles below to compact into a temporarily jammed solid, which grows out from the impact site in a manner reminiscent of a snowplough,’ Waitukaitis tells Chemistry World.

Itai Cohen, a physicist at Cornell University in Ithaca, US, who also explores the behaviour of particle suspensions, thinks this is a great piece of work. ‘It was a joy to read the Waitukaitis and Jaeger paper,’ he says. ‘The mechanism proposed by the authors to explain the effect is very simple and well supported by their experimental data.’

As well as explaining why we can walk on custard, this work could also have important practical applications. ‘There aren’t many materials out there that can switch from soft to hard almost instantaneously,’ says Waitukaitis. ‘What’s more, these materials do it automatically – they sense how hard they are being hit and respond accordingly. This has obvious usefulness in everything from construction to hydraulics to personal protection.’