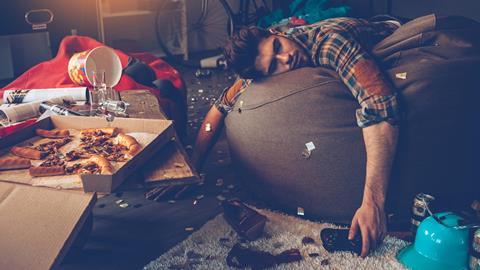 Why we get hangovers

The chemical cause of the morning after the night before

Most adults will have experienced a hangover following a night drinking alcohol, and the physical and psychological symptoms – headaches, dehydration, nausea, fatigue and reduced cognitive skills – will be all too familiar. Also known as veisalgia − from the Norwegian kveis, or ‘uneasiness following debauchery’, and the Greek algia, for ‘pain’ – usually we quickly learn that hangovers are preventable by abstaining from that favoured liqueur with the colour of potassium permanganate and the kick of a horse. But what’s going on at a chemical level?

What causes a hangover?

Hangovers are the result of the consumption of ethanol (CH3CH2OH), which is found in beers, wines and spirits. Ethanol has a wide range of effects on the body, such as dehydration, sleep deprivation and changes to the cardiovascular and endocrine (hormone) systems – all of which could play a role in making us feel ill in the morning.

Ethanol is metabolised in the liver via alcohol dehydrogenase in a process that needs the coenzyme nicotinamide adenine dinucleotide (NAD), and which produces acetaldehyde (CH3CHO, also known as ethanal) and reduced NAD.1 Acetaldehyde is a toxic and reactive alkylating compound which mediates much of the oxidative stress induced by alcohol abuse. This is believed to be another main contributor to what we call hangovers.

How does the body deal with acetaldehyde?

There are two forms of ALDH: ALDH1 – found in the cytosol, the liquid inside cells − has a low affinity for acetaldehyde and needs a high concentration of substrate to achieve its maximum rate of reaction; mitochondrial-associated ALDH2, by contrast, has a high affinity for the substrate and plays a more important role following consumption of an alcoholic drink.

Most Caucasians have both ALDH1 and ALDH2. However, only 50% of people of East Asian ethnicity have ALDH2.

Is acetaldehyde the only substance the body has to worry about?

Alcoholic drinks contain low concentrations of complex organic compounds other than ethanol – congeners – which exert toxic effects, and are by-products of the materials used in distilling and fermentation processes (eg casks). Congeners include acetone, tannins and furfural, with bourbon boasting 37 times more congeners than vodka.

Does this mean bourbon is more likely to cause hangovers than vodka?

Yes. In a study of around 90 hard-drinking, yet apparently healthy, participants (aged 21 to 33 years) to assess the effects of heavy drinking with high or low congener tipples on next-day neurocognitive performance, ‘[b]everage congeners in bourbon versus vodka did significantly increase the intensity of the hangover that was felt …’.5

How can I prevent a hangover?

The simplest way is to avoid drinking alcohol. However, there are alternatives that are currently being investigated. It’s thought that measures to boost ALDH activity may mitigate the effects of hangovers by reducing the availability of acetaldehyde.2 Bang et al3 tested the efficacy of a commercial anti-hangover product from South Korea by determining whether it enhanced aldehyde dehydrogenase activity in rats. The rodents were induced to a state of alcoholic stupor under laboratory conditions, the better to allow the researchers to conclude: ‘Oral intake of anti-hangover substance has significantly enhanced enzyme activities of alcohol metabolism in [a] rat model, particularly aldehyde dehydrogenase activity.’

Citing another study of an anti-hangover measure, Wiese et al4 describe ‘seventeen men and women attended two parties and were asked to drink the alcoholic beverage of their choice until intoxicated.’ At the first party, around half of the participants received a total of 1200mg of vitamin B6 (pyritinol) in tablet form (400mg before the party, 400mg during and 400mg after); the remainder were given a placebo. At the second party participants were given the alternate tablet. Although pyritinol reduced the number of hangover symptoms by around 50%, the mechanism for the effect couldn’t be explained.

Is there such as thing as being ‘hangover resistant’?

Perhaps those yet to experience a hangover are just still drunk; as Christopher Hitchens was once told by Kingsley Amis: ‘If you do not feel bloody awful after a hefty night then you are still drunk, and must sober up in a waking state before the hangover dawns.’7